Warren County is a county located in the northeastern Piedmont region of the U.S. state of North Carolina, on the northern border with Virginia, made famous for a landfill and birthplace of the environmental justice movement. As of the 2020 Census, the population was 18,642. Its county seat is Warrenton. It was a center of tobacco and cotton plantations, education, and later textile mills.

The county was formed in 1779 from the northern half of Bute County. It was named for Joseph Warren of Massachusetts, a physician and general in the American Revolutionary War who was killed at the Battle of Bunker Hill. Developed as tobacco and cotton plantations, the county generated considerable wealth for white planters in the antebellum years, wealth built on the labor of slaves. Its county seat of Warrenton became a center of commerce and was one of the wealthiest towns in the state from 1840 to 1860. Many planters built fine homes there.

In the later nineteenth century, the county developed textile mills. In 1881, parts of Warren County, Franklin County, and Granville County were combined to form Vance County. In the late nineteenth and early twentieth centuries, Warren County's continued reliance on agriculture slowed its development. Many residents migrated to cities for work.

Since the late 20th century, county residents have worked to attract other industrial and business development. Soul City, a "planned community" development, was funded by the Department of Housing and Urban Development (HUD). It has not been successful in attracting business and industry, and has not developed as much housing as intended.

Beginning in 1982, Warren County was the site of the Warren County PCB Landfill. Residents of the county have pursued a long environmental justice struggle to remove dangerous pollutants from the site, to improve the health of citizens. The site was not made safe until 2004. 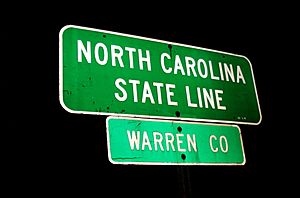 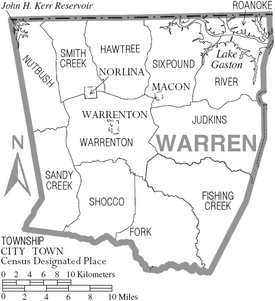 All content from Kiddle encyclopedia articles (including the article images and facts) can be freely used under Attribution-ShareAlike license, unless stated otherwise. Cite this article:
Warren County, North Carolina Facts for Kids. Kiddle Encyclopedia.