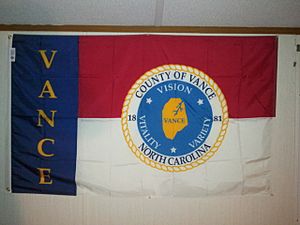 Vance County is a county located in the U.S. state of North Carolina. As of the 2020 census, the population was 42,578. Its county seat is Henderson.

The county was formed by the white Democratic-dominated legislature in 1881 following the Reconstruction Era from parts of Franklin, Granville, and Warren counties. The county is named after Zebulon Baird Vance, a Governor of North Carolina (1862–65 & 1877–79) and United States Senator (1879–94).

According to the 1955 book, Zeb's Black Baby, by Samuel Thomas Peace, Sr., this was a political decision to concentrate blacks and Republicans in one county and keep Democratic majorities in the other counties, an example of gerrymandering:

The formation of Vance County was accomplished largely as a political expediency. It was in 1881 when Blacks in large numbers were voting solidly Republican. Granville and Franklin Counties were nip and tuck, Democratic or Republican. From the Democratic standpoint, Warren County was hopelessly Republican. But by taking from Granville, Franklin and Warren, those sections that were heavily Republican and out of these sections forming the new county of Vance, the Democratic party could lose Vance to the Republicans and save Granville and Franklin for the Democrats. [U.S.] Senator Vance was a Democrat. He took kindly to this move and thanked the [North Carolina] Legislature for honoring him with naming the new county after him. At the same time...Vance showed his humor by always referring to Vance County as 'Zeb's Black Baby.'

In the 1890 Census, Vance County was more than 63 percent African American. In 1894 a biracial coalition of Populists and Republicans elected African American George M. White to the US Congress and gained control of the state house. The Democrats were determined to forestall this happening again. White strongly opposed the new constitution, saying "I cannot live in North Carolina and be a man and be treated as a man." He left the state after his second term expired, setting up a business in Washington, DC.

The Democrats in the North Carolina legislature settled the political competition with the Republicans by following other southern states and passing a law in 1896 making voting more difficult, and a new constitution in 1899 that disfranchised most blacks by poll taxes, literacy tests and grandfather clauses. Contemporary accounts estimated that 75,000 black male citizens of the state lost the vote. In 1900 blacks numbered 630,207 citizens, about 33% of the state's total population. This situation held until past the mid-20th century and after passage of the federal Voting Rights Act of 1965.

When originally established in 1881, the population of Vance County was approximately 9,000. From 1930 through 1970, the rural county population declined and growth slowed markedly as many blacks migrated to the North for better jobs and other opportunities in the Great Migration. Combined with other economic changes, this resulted in the county losing what had been its large African-American majority by the late 20th century. In the early 21st century, the white and black populations are nearly equal. 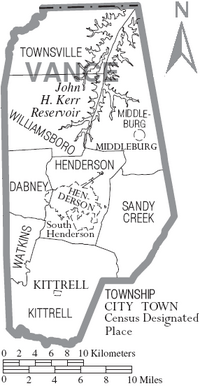 All content from Kiddle encyclopedia articles (including the article images and facts) can be freely used under Attribution-ShareAlike license, unless stated otherwise. Cite this article:
Vance County, North Carolina Facts for Kids. Kiddle Encyclopedia.