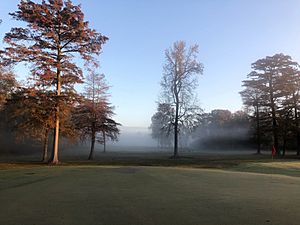 3rd Green at the Farmville Golf and Country Club

Farmville is a town in Pitt County, North Carolina, United States, eight miles to the west of Greenville. At the 2010 Census, the population was 4,654. Farmville is a part of the Greenville Metropolitan Area located in North Carolina's Inner Banks region. Farmville has been a Tree City USA community through the Arbor Day Foundation for 36 years, proving its commitment to managing and expanding its public trees. The Town government, in cooperation with other non-profit groups that work for the advancement of the town, sponsor annual events such as the Farmville Dogwood Festival, the Christmas Parade, Hometown Halloween, A Taste of Farmville, and the Holiday Open House, among others.

The Farmville Historic District and Benjamin May-Lewis House are listed on the National Register of Historic Places. 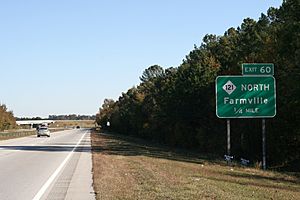 According to the United States Census Bureau, the town has a total area of 3.1 square miles (8.0 km2), all of it land.

Farmville is home to many public parks owned by the Town of Farmville, as well as multiple parks and sports venues owned by the Pitt County Schools System. The parks on school property are also available to the public. The primary complex and park in Farmville is the Farmville Municipal Athletic Complex, operated by the town's Parks and Recreation Department. It is only a block behind city hall and has many facilities and activities available. The following is a brief list of sports, parks, and recreation opportunities in Farmville.

Farmville is served by the Pitt County Schools district. Local public schools include:

All content from Kiddle encyclopedia articles (including the article images and facts) can be freely used under Attribution-ShareAlike license, unless stated otherwise. Cite this article:
Farmville, North Carolina Facts for Kids. Kiddle Encyclopedia.