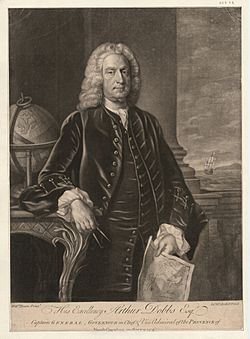 In 1779 the western part of Dobbs County became Wayne County, and the county seat was moved from its original location on Walnut Creek to the town of Kingston, which was renamed Kinston in 1784. Because the name Dobbs reminded the population of the colonial past, in 1791 Dobbs County was divided by the North Carolina legislature into Glasgow County (later renamed Greene County) and Lenoir County, and ceased to exist.

All content from Kiddle encyclopedia articles (including the article images and facts) can be freely used under Attribution-ShareAlike license, unless stated otherwise. Cite this article:
Dobbs County, North Carolina Facts for Kids. Kiddle Encyclopedia.