Beulaville is a town located in Duplin County, North Carolina, United States. The population was 1,296 as of 2010, making it the fourth most populous town in the county. The community lies within Limestone Creek Township.

The earliest Native Americans thought to have roamed the area were the Joara (whose settlements date back to AD 1000), based out of present-day Burke County. The Joara were the chiefdom of the Mississippian culture. Immediately prior to European colonization in the early 18th century, the coastal plain of North Carolina was home to many distinct Native American tribes: the Coree, Coharie, several small Neusiok communities, and the Tuscarora. This latter tribe gradually became the most dominant in the region as smaller tribes were either exterminated by Europeans or peacefully assimilated into the Tuscarora for collective security. By the time of permanent European settlement, the Tuscarora were utilizing the heavily forested areas of eastern Duplin County as a hunting ground.

Native American burial mounds are numerous in Duplin County, in the rural areas surrounding Beulaville especially. There are four sizable mounds within a ten-mile radius of the town, the two largest being in the vicinity of Hallsville and Sarecta. Combined, these mounds contain roughly one hundred bodies.

The arrival of the Palatines at New Bern and the ensuing wave of English and Welsh settlers sparked a conflict known as the Tuscarora War (1710–1715). With the elimination of the last Tuscarora stronghold at Fort Neoheroka and subsequent exodus of the remainder of the tribe to New York (they became the sixth nation of the Iroquois Confederacy), the interior of the coastal plain was made available for European settlement. Many of the original European settlers of what is now Beulaville arrived from Jones, Onslow, Beaufort, and Craven counties.

In 1736, Duplin County (then upper New Hanover County) was the destination of several hundred Ulster Scots (Scotch-Irish) and a handful of Swiss Protestants. They settled on a plot of land, 71,160 acres (28,800 ha) between the Northeast Cape Fear River and Black River, obtained from the Crown by Henry McCulloh of London. Their first settlements were Soracta (Sarecta) on the Northeast Cape Fear, an area at the lower end of Goshen Swamp (then called Woodward's Chase), and the grove where the Duplin County Courthouse now stands. According to census records, several families of Sarecta and the settlement at the south end of Goshen Swamp had gravitated to the crossroads of what would become Beulaville by the middle of the nineteenth century.

Beulaville proper was founded as "Snatchet" in 1873 out of necessity for a trading center for nearby farmers and those in the business of logging and turpentine production. Also colloquially referred to as "Tearshirt" by locals, the town was once notorious for alcoholism and frequent street brawls. Indeed, the manufacture and distribution of corn liquor remained a steady source of income for many families well into the 20th century. Upon demolition of a prominent downtown building (which had formerly served as a soda shop in the 1950s) to make way for a McDonald's, a moonshine still and several barrels of the drink were uncovered in the basement.

The Kinston Carolina Railroad and Lumber Company constructed a railway from Kinston to Pink Hill around 1900. In response, residents of Limestone Creek Township spent $15,000 to lobby for the creation of the "Duplin County Railroad" in 1916, extending the Kinston line through Beulaville and Chinquapin. The rail, which ran alongside present-day Railroad Street, has since been destroyed. The post office of Snatchet was officially re-designated "Beulaville" in 1910, and the town was incorporated five years later. The town's name is derived from the Beulah Baptist Church (now the Beulaville Baptist Church). Beulaville is the most recent town to be incorporated in Duplin County. 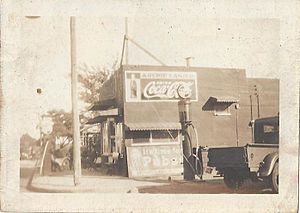 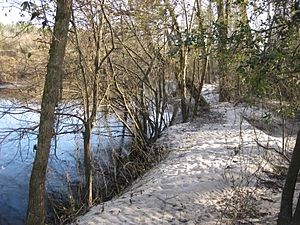 On the banks of the Northeast Cape Fear River at Hallsville

Situated 4 miles (6 km) east of the meandering Northeast Cape Fear River, Beulaville offers much in the way of outdoor recreation. There are two boat landings on the Northeast Cape Fear River within a 7-mile (11 km) radius of town. The communal landing at Hallsville, which had, for centuries, been used by locals for activities ranging from baptisms to bonfires, has been closed off to the public. The other landing is located west of Beulaville, off Highway 24, half way to Kenansville. Several golf courses can also be found near Beulaville and in the greater Duplin area.

5 miles (8 km) north of Beulaville on Highway 111, the 167-acre Cabin Lake County Park attracts many locals and visitors for year-round camping, canoeing, and hiking. Additionally, the Tarkil Branch Farm Museum at Cedar Fork, 7 miles (11 km) southeast of Beulaville, features a genuine 1830s homestead complete with over 850 artifacts; the operation is situated on a 375-acre working farm.

According to the United States Census Bureau, the town has a total area of 1.5 square miles (3.9 km2), all of it land.

There were 442 households out of which 26.0% had children under the age of 18 living with them, 43.7% were married couples living together, 15.6% had a female householder with no husband present, and 38.0% were non-families. 35.5% of all households were made up of individuals and 16.5% had someone living alone who was 65 years of age or older. The average household size was 2.24 and the average family size was 2.89.

All content from Kiddle encyclopedia articles (including the article images and facts) can be freely used under Attribution-ShareAlike license, unless stated otherwise. Cite this article:
Beulaville, North Carolina Facts for Kids. Kiddle Encyclopedia.