Sampson County is the second-largest county, by land area, in the U.S. state of North Carolina by area. As of the 2010 Census, the population was 63,431. Its county seat is Clinton.

Sampson County was formally and legally established in April 1784 by the North Carolina General Assembly from an area taken from neighboring Duplin County. Land from neighboring Wayne County and New Hanover counties would be annexed later.

The early settlers were Scotch-Irish immigrants from North Ireland, many of who came to the colony of North Carolina under the protection and inducements of Henry McCulloch, a wealthy London merchant. The community of Taylors Bridge, located about halfway between Clinton and Harrells in lower Sampson County (at the time Duplin County), was one of the earliest European settled areas of the county, with pioneer families living there as early as the 1730s or 1740s. The first settlers of the area were Edmond Matthis, William Johnson, William Robinson and John Register, followed by members of the Peterson, Knowles, Vann, Boney, Merritt, Pearson, Powell, Herring, Rogers, Bryant, Ezzell, James Murphy, Ward, Sellers, Parrish, Fryar, Williamson and Bass families. In 1745, McCullough had obtained grants from the British Crown covering some 71,160 acres of land "lying and situated on the branches of the North East and Black River." The Scotch-Irish immigrants were soon joined by descendants of the Swiss colony in New Bern, and sometime later, pioneers from the northern states of New Jersey, Connecticut and Massachusetts.

Among these first European Settlers of the area was John Sampson. Sampson was the first register of deeds of Duplin County. He served as a Lt. Colonel, and then a Lt. General in the county’s militia and was later the first mayor of Wilmington, North Carolina. John Sampson brought along who is thought to be his step-son Richard Clinton. Like his stepfather, Richard Clinton soon distinguished himself in governmental and military service, serving as Duplin County’s Register of Deeds for ten years, and then in the Provincial Congress held at Hillsboro. In 1776, Richard Clinton organized a company of militia minutemen from upper Duplin County and led them as captain in the defense of Wilmington against the British. He was later appointed Colonel of Cavalry and Brigadier General of the Fayetteville District. Upon the establishment of the state government of North Carolina by the Halifax Constitution of 1776, Richard Clinton served as one of the first members of the House of Commons, representing the County of Duplin as a House member while his brother-in-law James Kenan served in the Senate . Clinton continued as a representative of Duplin County until the creation of Sampson County in 1784. Clinton secured the passage of the act creating the new county, and proposed the name "Sampson" in honor of John Sampson, his stepfather and benefactor.

There is indeed evidence of a mixed European / Native American population in Southern and Western Sampson County prior to the settlements of the earliest Scottish, English, and Irish people in the 1740s.

Currently, a significant minority of the people living in Sampson County are members of the state recognized Coharie Native American Tribe. Many of these tribe members have slowly begun to recognize their Native American status over the last few decades, whereas before they considered themselves to be of European and African ancestry.

According to George Edwin Butler who wrote "The Croatan Indians of Sampson County, North Carolina. Their Origin and Racial Status. A Plea for Separate Schools" about this particular group of Native Americans in Sampson County in 1916, many of these Natives were classified as "Whites", "Mulatto", "Colored" and "Negro" during the census' of the 19th century. Census enumerators reported that these people had European and African looking features and names, but acted clannish towards outsiders.

There is reason to believe that these Native Americans of Sampson County may actually be descendants of the The Lost Colony and Free Blacks who assimilated with the Native tribes upon the colony's collapse. There are no records of any English Settlement inland of the North Carolina Coast prior to 1703 when John Lawson explored the inner region of North Carolina. During his exploration, he found Native Americans who were tilling the land, speaking an antiquated English, having gray and blue eyes, and wanting Lawson to teach them how to "speak from a book" as their forefathers did. Further evidence supports this claim by way of these Native Americans bearing English surnames that match the surnames of those who were thought to have perished at the The Lost Colony.

The county is drained by the Black and South Rivers, as well as Six Run Creek.

Sampson County is also one of the largest producers of hogs in the nation, and second in the state, with a population of over 2 million hogs. 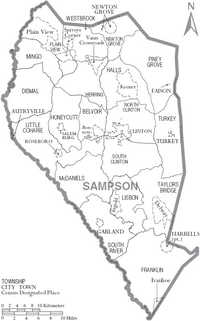 Historically, Sampson County has been an agricultural county with a slow rise in population since the creation of the county. The agricultural sector continues to be one of the leading pillars of the economy. Leading industries prior to the 20th century were naval stores, timber and agriculture. After the Civil War, the Naval Stores and timber industries began to lose production value in the county to the lack of cheap labor due to the eradication of slavery among other factors; as a result, subsistence agriculture became the primary industry. The county has steadily gained stronger manufacturing and services industries since the Civil War.

As of 2007, agricultural land covered over 50% of the county's land area. A wide range of crops are grown in the county ranging from vegetables, fruits and berries to tobacco, peanuts, corn, soybeans and wheat. Manufacturing, agriculture, healthcare, education and retail are the primary sources of employment in the county.

Sampson County has a county-wide public school system for the grades of K-12 with the exception of the City of Clinton, which has its own public school district for grades K-12. The only post-secondary public institution in the county is Sampson Community College. Hobbton High School is the oldest school building in Sampson County; located in Newton Grove, it is a small 1A school.

The J.C. Holliday Library in Clinton is the headquarters library for the county. It houses the largest collection of items including research materials and a local history and genealogy collection. There are also reference and children's services provided at this branch.

All content from Kiddle encyclopedia articles (including the article images and facts) can be freely used under Attribution-ShareAlike license, unless stated otherwise. Cite this article:
Sampson County, North Carolina Facts for Kids. Kiddle Encyclopedia.