Autryville is a town in Sampson County, North Carolina, United States. The population was 196 at the 2010 census. Located along the west side of Sampson County along the banks of South River at the Cumberland County, North Carolina line, Autryville is governed by a mayor and a five-member town commission. The town is about 15 miles east-southeast of Fayetteville along NC 24. 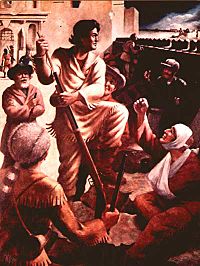 In April 1889, President Gray of the Cape Fear and Yadkin Valley Railway designated Autrys as a depot. Later in 1891, Autryville was incorporated, and a new town was born. Autryville is home to Micajah Autry, a Sampson County resident and son of Theophilus and Elizabeth (Crumpler) Autry who fought in the Battle of the Alamo alongside Davy Crockett. Between the ages of 17 and 18, he volunteered for service against the British in the War of 1812 and remained in Charleston in the company of Captain Long until the Treaty of Ghent was signed in 1815. Afterward, Autry studied law and was admitted to the bar in Jackson, Tennessee, where he practiced from 1831-35 until he went to Texas. Autry, an expert marksman, was chosen by his company to eliminate Antonio López de Santa Anna, who often walked across the grounds near the Mexican battle lines. He missed. After a siege lasting 13 days, Autry was killed with the rest of the Alamo garrison after the Mexican army stormed it on March 6, 1836. A letter to his wife, dated February 11, 1834, is on display at the Alamo.

Each year in mid-July the true story, “A Man Called Micajah,” reveals the life of Micajah Autry in Autryville’s outdoor theatre. The town also celebrates Micajah Autry Day in May with a parade, arts and crafts, delicious food, entertainment, music and dance.

The Thomas Bullard House was added to the National Register of Historic Places in 2014.

According to the United States Census Bureau, the town has a total area of 0.5 square miles (1.3 km2), all of it land.

According to the 2000 Census, there were 97 households, out of which 20.6% had children under the age of 18 living with them, 42.3% were married couples living together, 11.3% had a female householder with no husband present, and 43.3% were non-families. 40.2% of all households were made up of individuals, and 15.5% had someone living alone who was 65 years of age or older. The average household size was 2.02 and the average family size was 2.62. 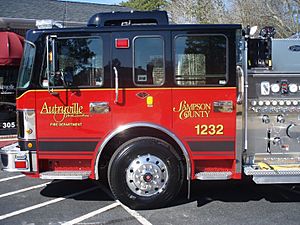 The Autryville Fire Department was chartered in 1974. It is an all volunteer department with a roster of 25 members and a Board of Directors. The department serves the Town of Autryville in western Sampson County and a 6-mile fire district and runs mutual aid with other departments in Sampson and Cumberland Counties. The Autryville Fire District has Fire rating of 6 in the town and an 8 in the 6-mile district. The first pumper was a 1956 Chevrolet truck with a 500-gallon per minute pump and 500 gallons of water. Today the department runs two fire engines that both carry 1000 gallons of water each with a 1500-gallon per minute pump on them, a tanker truck that carries 1300 gallons of water, and a brush truck that is used for field and brush fires in the Autryville fire district and surrounding districts in Sampson and Cumberland Counties.

All content from Kiddle encyclopedia articles (including the article images and facts) can be freely used under Attribution-ShareAlike license, unless stated otherwise. Cite this article:
Autryville, North Carolina Facts for Kids. Kiddle Encyclopedia.