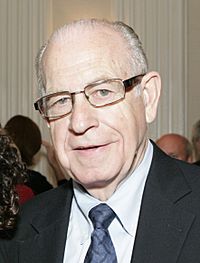 Carl Kasell ( April 2, 1934 – April 17, 2018) was an American radio personality. He was born in Goldsboro, North Carolina. He was best known as a newscaster for National Public Radio and later as the official judge and scorekeeper of the weekly news quiz show Wait Wait... Don't Tell Me! until his retirement in 2014.

Kasell died on April 17, 2018 from complications of Alzheimer's disease in Potomac, Maryland at the age of 84.

All content from Kiddle encyclopedia articles (including the article images and facts) can be freely used under Attribution-ShareAlike license, unless stated otherwise. Cite this article:
Carl Kasell Facts for Kids. Kiddle Encyclopedia.