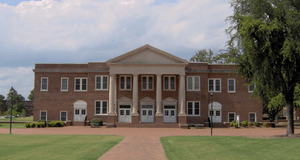 D. Rich Memorial Building which is on the campus.

Campbell University is a private, coeducational baptist university in Buies Creek, North Carolina. The university has about 10,471 students. It was founded in 1887. The current president of the university is Jerry M. Wallace.

The athletics teams of the university are called the Fighting Camels. They have 18 varsity teams which mostly compete in the Big South Conference. Despite the Big South sponsoring football, the Campbell football team plays in the Pioneer Football League (PFL). That league is made up of schools that choose not to offer scholarships for football, despite offering them in other sports.

All content from Kiddle encyclopedia articles (including the article images and facts) can be freely used under Attribution-ShareAlike license, unless stated otherwise. Cite this article:
Campbell University Facts for Kids. Kiddle Encyclopedia.