Lee County is a county located in the U.S. state of North Carolina. As of the 2020 census, the population was 63,285. The county seat is Sanford. It was established on March 6, 1907, from parts of Chatham and Moore counties, and named for General Robert E. Lee, who served as the General in Chief of the Armies of the Confederate States in 1865. 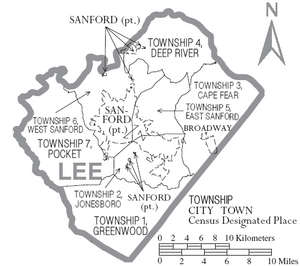 The county is divided into seven townships, which are both numbered and named:

All content from Kiddle encyclopedia articles (including the article images and facts) can be freely used under Attribution-ShareAlike license, unless stated otherwise. Cite this article:
Lee County, North Carolina Facts for Kids. Kiddle Encyclopedia.