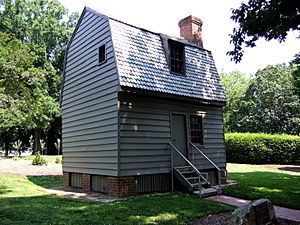 U.S. President Andrew Johnson's birthplace and childhood home is located in the park

The Mordecai House (also called the Mordecai Plantation or Mordecai Mansion), built in 1785, is a registered historical landmark and museum in Raleigh, North Carolina that is the centerpiece of Mordecai Historic Park, adjacent to the Historic Oakwood neighborhood. In addition to the house, the Park includes the birthplace and childhood home of President Andrew Johnson, the Ellen Mordecai Garden, the Badger-Iredell Law Office, Allen Kitchen and St. Mark's Chapel, a popular site for weddings. It is located in the Mordecai Place Historic District.

The oldest portion of the house was built by Joel Lane for his son, Henry. At one time, the plantation house was the center of a 5,000-acre (20 km2) plantation, one of the largest in Wake County. Lane is considered a founder of Raleigh, as 1,000 acres was sold from his plantation as the site of the city.

The house was named after Moses Mordecai, whose first wife, Margaret Lane, had inherited it from her father Henry. After she died, Mordecai married her sister Ann Lane. In 1824, Mordecai hired William Nichols, State Architect at the time, to enlarge the house. The addition was considered a significant work of Nichols, who had also been responsible for remodeling the original building containing the State House. With the addition of the four new rooms in 1826, the Mordecai house was transformed into a Greek Revival mansion.

The Mordecai family, descended from immigrant grandfather Moses Mordecai (1707–1781) of Bonn, Germany, became one of the original three hundred Jewish families in the United States and one of the few of Ashkenazic Jewish descent. The family members were prominent in local and state affairs. Jacob Mordecai, Moses' father, founded a girls' school in Warrenton, North Carolina. A prominent lawyer, Moses Mordecai was a member of the 1805 Court of Conference. With his first wife Margaret, Moses Mordecai had two sons, Henry and Jacob, and one daughter, Ellen. He and his second wife Ann had a daughter, named Margaret after his late wife, Ann's sister. Henry Mordecai became a prosperous planter at Mordecai House and was elected to the State Legislature. The family were also prominent slave owners, and many slaves, both those who worked in the home and those who worked the fields, lived on the former plantation. The State Historic site narrates the stories of both the free and enslaved residents, including moving testimonials from three former slaves . His daughter Margaret Mordecai married and inherited the mansion; her descendants owned and occupied Mordecai House until 1967.

During the 19th and early 20th centuries, the Mordecai family sold off land, which was subdivided for the continuing expansion of Raleigh. In 1867, George Washington Mordecai donated land east of the city to establish a Confederate cemetery; he donated another plot for Wake County's first Hebrew Cemetery. (The adjacent Oakwood Cemetery, chartered in 1869, became the namesake of the large suburb that developed in the adjoining wooded land, which was earlier known as Mordecai Grove. In 1974, Oakwood became the first neighborhood in Raleigh to be listed in the National Register of Historic Places.)

Mordecai descendants owned the mansion property until 1967, when the house and its surrounding block were put on the market. Local preservationists protested and the city purchased the property, turning it over to the Raleigh Historic Sites Commission to supervise and develop as a historic park. The commission was able to obtain many original Mordecai furnishings, as well as preserve the family papers and library. Mordecai Historic Park is now managed by the City of Raleigh's Parks, Recreation and Cultural Resources Department. The Mordecai House is a designated Raleigh Historic Landmark. Mordecai House was featured in a season two episode of Ghost Hunters in which the TAPS team investigated claims of paranormal activity. Mordecai Historic Park has an exclusive paranormal research team since 2017, The Ghost Guild Inc., a registered nonprofit organization that investigates the location at least three times per year and presents their findings at the annual Haunted Mordecai Festival in October.

All content from Kiddle encyclopedia articles (including the article images and facts) can be freely used under Attribution-ShareAlike license, unless stated otherwise. Cite this article:
Mordecai House Facts for Kids. Kiddle Encyclopedia.