Duke Energy Center for the Performing Arts facts for kids

Duke Energy Center for the Performing Arts is the main venue for the performing arts in Raleigh, North Carolina.

The naming rights to the center currently are held by Duke Energy (formerly Progress Energy), which purchased them from the city in 2005 for a 20-year term at the cost of $7.5 million. The original naming rights previously were held by Business Telecom, Inc. (now EarthLink)), and the facility was known as the BTI Center for the Performing Arts from 1997-2005. BTI Owner Peter Loftin donated $3.1 million to the center in 1999, matching BTI's earlier donation.

The center consists of:

Raleigh Memorial Auditorium opened in 1932 to replace the city's original 1912 City Auditorium, which burned in 1930. The auditorium's name commemorates Raleigh citizens who died serving their country during World War I.

Situated downtown at the southern end of Fayetteville Street, the Greek Revival structure is an architectural complement to the North Carolina State Capitol located a few blocks away at the northern terminus of the street. The removal of the obstructive original Raleigh Convention Center in 2005 (now replaced with a building on an adjacent site) restored the historic vista along Fayetteville Street between Memorial Auditorium and the Capitol.

Following minor improvements in 1963 and 1977, the auditorium was renovated extensively in 1990, with the notable addition of an external modern glass concourse and lobby. The venue seats 2,277 and most often hosts large musical theater productions.

Fletcher Opera Theater seats 600, providing a more intimate space for chamber music, solo and operatic performances, as well as other ensemble productions. The theater is named in honor of Alfred Johnston Fletcher (1887-1979), a pioneer of television broadcasting in Raleigh, whose family foundation provided partial funding for its construction. In 2010, Carolina Ballet became the theater's resident performing arts organization, performing over 40 times per season in the theater. 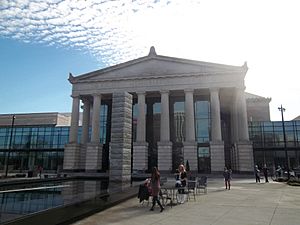 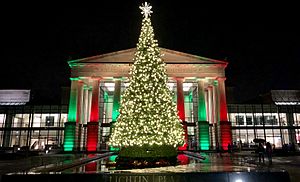 Lichtin Plaza is the 2-acre (8,100 m2) lawn fronting the Duke Energy Center. It often serves as a venue for outdoor festivals, as well as the site of public and private gatherings and tented events. The plaza is named for Harold Lichtin, a prominent regional commercial real estate developer.

Organizations that regularly hold performances and concerts at the Duke Energy Center include:

All content from Kiddle encyclopedia articles (including the article images and facts) can be freely used under Attribution-ShareAlike license, unless stated otherwise. Cite this article:
Duke Energy Center for the Performing Arts Facts for Kids. Kiddle Encyclopedia.