Carolina Ballet is a ballet company founded in 1997 which performs primarily in Raleigh, North Carolina and throughout the state. It has toured to New York City, Hungary, and China. Robert Weiss, the artistic director, danced for George Balanchine for sixteen years at New York City Ballet and attained the rank of principal dancer. Lynne Taylor-Corbett is principal guest choreographer. One of Carolina Ballet's most popular performances, The Nutcracker, is performed annually. Carolina Ballet currently has about 35 dancers. 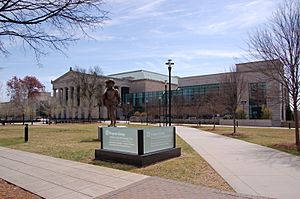 Carolina Ballet, Inc. was founded in 1984 as Raleigh Dance Theatre, Inc. by Ann Vorus, owner of the Raleigh Dance Theatre. As a student company, its purpose was to provide performance opportunities for students of the school. Over several years, both the school and the company grew in reputation and stature in its metamorphosis as Carolina Ballet Theatre, a pre-professional regional company under Ms. Vorus and her successor as Artistic Director, Mary LeGere. Performances of the company began to attract favorable notice from area dance critics. In the fall of 1993, Raleigh lawyer Ward Purrington suggested to Ms. Vorus and the Raleigh Dance Theatre board that the company aspire to professional status. Market research suggested a professional dance presence in the Triangle region was not only needed but desired as well.

Dancers of the Carolina Ballet, as of April 2019:

All content from Kiddle encyclopedia articles (including the article images and facts) can be freely used under Attribution-ShareAlike license, unless stated otherwise. Cite this article:
Carolina Ballet Facts for Kids. Kiddle Encyclopedia.