Morehead Planetarium and Science Center is located on the campus of the University of North Carolina at Chapel Hill. It is one of the oldest and largest planetariums in the United States having welcomed more than 7 million visitors by its 60th anniversary in 2009. As a unit of the university, Morehead receives about one-third of its funding through state sources, one-third through ticket and gift sales, and one-third through gifts and grants.

First opened in 1949, the planetarium was used to train Gemini and Apollo program astronauts in celestial navigation. Until the late 1990s, it contained one of the largest working Copernican orreries in the world. The facility was donated to the university by alumnus John Motley Morehead III who invested more than $3 million in the facility.

Morehead Planetarium opened on May 10, 1949 after seventeen months of construction. The first planetarium in the South, it was the sixth to be built in the United States. Designed by the same architects who planned the Jefferson Memorial, the cost of its construction, more than $23 million in today's dollars, made it the most expensive building ever built in North Carolina at the time. Morehead Planetarium was officially dedicated during a ceremony held on May 10, 1949. 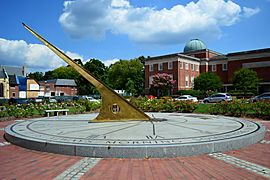 The sundial in front of Morehead Planetarium.

Since Zeiss, the German firm that produced planetarium projectors, had lost most of its factories during World War II, there were very few projectors available at the time. Morehead had to travel to Sweden, where he had previously served as American ambassador, to purchase a Zeiss Model II to serve as the heart of North Carolina's new planetarium.

Let There Be Light was the planetarium's first show.

From 1959 through 1975 every astronaut in the Mercury, Gemini, Apollo, Skylab, and Apollo–Soyuz Test Project programs spent hours in celestial navigation training at the planetarium. Morehead technicians developed simplified replicas of flight modules and tools for use in the training, often from plywood or cardboard. A mockup simulating key parts of the Gemini capsule was constructed from plywood and mounted on a barber chair to enable changes in pitch and yaw. Several of these items are on display at the planetarium. That training may have helped save astronauts' lives on occasion. Astronauts aboard Apollo 12 called upon that training after their Saturn V rocket was hit by lightning twice during ascent, knocking spacecraft systems offline and requiring them to configure navigation systems based on fixes taken manually. Gordon Cooper used his training to make the most accurate landing of Project Mercury after a power failure affected navigational systems. Astronauts enjoyed soft drinks, cookies and other snacks during their intense hours-long training session, leading planetarium employees to create the code name "cookie time" to refer to the training sessions. Occasionally, word of the sessions leaked out and noted clothing designer and Chapel Hill native Alexander Julian recalls meeting Mercury Astronauts during a visit to the planetarium while in junior high.

The first astronaut to train at Morehead, in March 1964, was Neil Armstrong. Armstrong visited again only months before the 1969 launch of Apollo 11, spending a total of 20 days at Morehead over 11 training sessions, more than any other astronaut. Astronauts commented that the "large dome" was "highly realistic", calling the facility "superb".

Morehead's planetarium seats about 240 people, with a dome that is 68 feet (21 m) in diameter and 44 feet (13 m) tall. It currently has two different projection systems.

In February 2010, Morehead introduced its new fulldome digital video (FDV) projection system, the largest FDV installation in the southeastern United States. Funding for the new system was provided by GlaxoSmithKline, and the planetarium's star theater is now named the GlaxoSmithKline Fulldome Theater.

Morehead's historic star projector, a Carl Zeiss Model VI, was installed in 1969 and remained in limited use as of April 2011, primarily for field trip groups. This projector displays about 8,900 different stars on the dome overhead. The analog planetarium shows are a combined effort of the Zeiss projector, slide projectors and video projectors working together to form a multimedia experience. Planetarium officials hope to display at least a portion of the projector somewhere in the center. The projector was removed in August 2011.

On February 23, 2007, Morehead opened its first interactive exhibit, Zoom In: Science at the Extremes. It features current science at the extremes of size and scale, including research done by UNC scientists.

The Ancient Carolinians opened on November 17, 2007. This exhibit explores the lives of the first people to live on the land now known as North Carolina, interpreting the use of 10,000-year-old artifacts from the Hardaway archaeological site. This exhibit is supported in part by the Alcoa Foundation, which donated the artifacts to the university. After January 1, 2009, the exhibit installation was removed so that The Ancient Carolinians could become Morehead's first traveling exhibit.

Morehead Planetarium and Science Center offers live, educator-led programs in its Science Stage. Science LIVE! shows present the foundations of science, on a variety of topics, through experiments and demonstrations that often involve volunteers from the audience. Science Live! Educators focus on making complex scientific concepts relatable, fun, and engaging for audiences of all ages. Visitors can enjoy Science Live! shows every weekend the planetarium is open to the public.

The DESTINY Traveling Science Learning Program, which was founded by UNC in 2000, became part of Morehead in 2006.

The PLANETS Portable Planetarium Program brings the fulldome planetarium experience to elementary schools that are too far from Morehead to plan a field trip to the center.

Each year, the Jupiter Committee (a volunteer group that assists in planning the Jupiter Ball fundraising gala for Morehead) awards the Jupiter Fellowship. This award goes to the student employee(s) who submits the best proposal for a Morehead program, activity or innovation. The fellowship funds the implementation of the proposal.

Record setting crowds attended events for the 2012 transit of Venus. Nearly 3000 crowded the planetarium, observatory, rooftop, and sidewalk outdrawing events at major planetariums in larger cities such as the Griffith Observatory in Los Angeles and Adler Planetarium in Chicago. Morehead opened the planetarium and observatory to the public, hosted astronomy talks and volunteers from local astronomy clubs with solar telescopes and distributed solar viewing glasses.

All content from Kiddle encyclopedia articles (including the article images and facts) can be freely used under Attribution-ShareAlike license, unless stated otherwise. Cite this article:
Morehead Planetarium and Science Center Facts for Kids. Kiddle Encyclopedia.