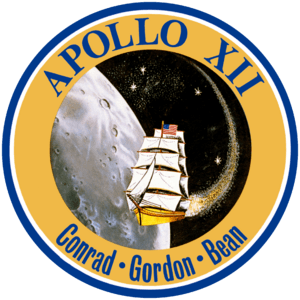 Apollo 12 was the sixth manned flight in the Apollo program. It was the second manned spacecraft to land on the Moon. Apollo 12 was launched on November 14, 1969. Charles "Pete" Conrad and Alan Bean become the third and fourth persons to stand on the lunar surface, while Richard Gordon stayed in orbit around the Moon. The two astronauts spent over seven hours exploring the surface of the Ocean of Storms. They brought back pieces of Surveyor III which had landed on the Moon in April 1967. They set up a number of experiments which would continue to collect information after they left. The Lunar ascent stage, the part that helped it take off from the surface, was deliberately crashed back onto the Moon so that shock waves could be measured by seismic equipment left behind.

All content from Kiddle encyclopedia articles (including the article images and facts) can be freely used under Attribution-ShareAlike license, unless stated otherwise. Cite this article:
Apollo 12 Facts for Kids. Kiddle Encyclopedia.