Kids Encyclopedia Facts
Not to be confused with National Air and Space Museum. 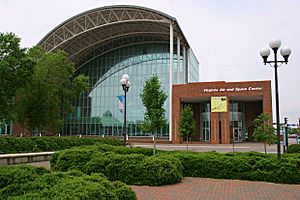 The Virginia Air and Space Center is a museum and educational facility in Hampton, Virginia that also serves as the visitors center for NASA's Langley Research Center and Langley Air Force Base. The museum also features an IMAX digital theater and offers summer aeronautic- and space-themed camps for children.

The museum's permanent collection is housed in a three-story glass atrium accessible from two exhibit floors with an additional catwalk level available for viewing suspended aircraft from above. Volunteers maintain an amateur radio exhibit displaying modern and historic radio equipment. The exhibit also participates in the Space Amateur Radio Experiment where visitors can periodically talk to astronauts aboard the International Space Station. 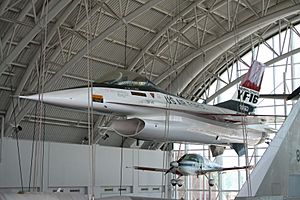 A YF-16 on display at the Virginia Air and Space Center.

The gallery emphasizes hands-on and immersive experiments on flight concepts such as control surfaces and propeller design, and experiences such as flight simulators. The gallery also features numerous aircraft suspended from the roof in the main gallery. Most are restored and have close ties to flight research performed at area NASA, Air Force and Naval installations. 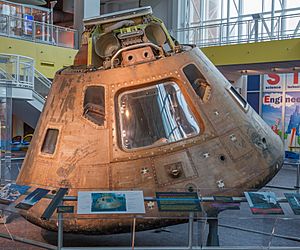 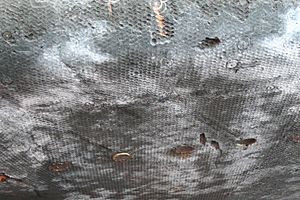 Visitors enter through a room which simulates a manned launch to Mars, telling the story of a rendezvous with a Mars Transit Vehicle and arrival at the planet where doors open up into the gallery.

Visitors can experience the hands-on space gallery, "Space Quest: Exploring the Moon, Mars & Beyond," presented by Langley Federal Credit Union. This gallery includes four different exhibits; Our Solar System, Living and Working in Space, Mars and the Moon, and Visions of Space Exploration.

This permanent exhibit focuses on the planets within the Solar System and showcases planetary models in an array of sizes. Saturn, Jupiter, Uranus, and Neptune hang high above the second-floor, nearly 30 feet high. These four models are the largest in the country to be displayed inside a museum or science center. Jupiter, the largest of the models, weighs more than 750 pounds, has a diameter of 10 feet, and hangs approximately 22 feet in the air. Saturn is eight-and-a-half feet in diameter and weighs 450 pounds, with an additional 495 pounds of rings encircling the planet's body. Hanging more than 30 feet high, Saturn floats above Uranus and Neptune, which each weigh around 65 pounds. The models are composed of heavy-duty Styrofoam which is painted to resemble each of the planets. The Solar System is completed with smaller models of Earth, Mars, Venus, and Mercury mounted at the visitor's level. Created to be a scale model system, Earth is about the size as a soccer ball and Mercury the size of a baseball.

Out of 447 IMAX theaters worldwide and 256 in the US, the Riverside IMAX 3D Theater, is the first institutional theater in the world to have an IMAX Digital.

All content from Kiddle encyclopedia articles (including the article images and facts) can be freely used under Attribution-ShareAlike license, unless stated otherwise. Cite this article:
Virginia Air and Space Center Facts for Kids. Kiddle Encyclopedia.