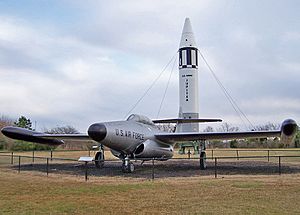 The Air Power Park is an outdoor, roadside museum in Hampton, Virginia which recognizes Hampton's role in America's early space exploration and aircraft testing. The outdoor park is open year-round, seven days a week from sunrise to sunset. Several vintage aircraft and experimental space launch vehicles from the 1950s and 1960s are displayed out of doors. The park is on a 15 acres (6.1 ha) plot and includes a children's playground.

The indoor museum at the center of the park was reopened after a 2011 renovation (with hours more limited than the outdoor part of the park). There are eight themed rooms containing over 325 models of aircraft, space craft, and nautical vessels representing all the U.S. branches of service as well as various model craft from other nations. The park also has a time capsule 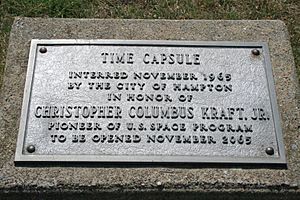 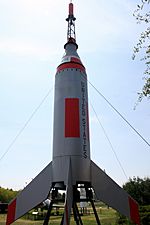 The following are listed as on display:

All content from Kiddle encyclopedia articles (including the article images and facts) can be freely used under Attribution-ShareAlike license, unless stated otherwise. Cite this article:
Air Power Park Facts for Kids. Kiddle Encyclopedia.