The Langley Research Center (LaRC or NASA Langley), located in Hampton, Virginia, United States, is the oldest of NASA's field centers. It directly borders Langley Air Force Base and the Back River on the Chesapeake Bay. LaRC has focused primarily on aeronautical research, but has also tested space hardware at the facility, such as the Apollo Lunar Module. In addition, a number of the earliest high-profile space missions were planned and designed on-site, and Langley was considered a potential site for NASA's Manned Space Center prior to the eventual selection of Houston.

Established in 1917 by the National Advisory Committee for Aeronautics (NACA), the research center devotes two-thirds of its programs to aeronautics and the rest to space. LaRC researchers use more than 40 wind tunnels to study and improve aircraft and spacecraft safety, performance, and efficiency. Between 1958 and 1963, when NASA (the successor agency to NACA) started Project Mercury, LaRC served as the main office of the Space Task Group.

In September 2019, after previously serving as associate director and deputy director, Clayton P. Turner was appointed director of NASA Langley. 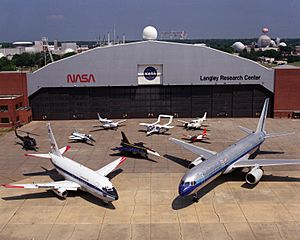 A variety of research aircraft at NASA Langley in 1994

After US-German relations had deteriorated from neutral to hostile around 1916, the prospect of U.S. war entry became possible. On February 15, 1917, the newly established Aviation Week warned that the U.S. military aviation capability was less than what was operating in the European war. President Woodrow Wilson sent Jerome Hunsaker to Europe to investigate, and Hunsaker's report prompted Wilson to command the creation of the nation's first aeronautics laboratory, which became NASA Langley.

In 1917, less than three years after it was created, the NACA established Langley Memorial Aeronautical Laboratory on Langley Field. Both Langley Field and the Langley Laboratory are named for aviation pioneer Samuel Pierpont Langley. The Aviation Section, U.S. Signal Corps had established a base there earlier that same year. The first research facilities were in place and aeronautical research was started by 1920. Initially the laboratory included four researchers and 11 technicians.

Langley Field and NACA began parallel growth as air power proved its utility during World War I. The center was originally established to explore the field of aerodynamic research involving airframe and propulsion engine design and performance. In 1934 the world's largest wind tunnel was constructed at Langley Field with a 30-by-60-foot (9.1 m × 18.3 m) test section; it was large enough to test full-scale aircraft. It remained the world's largest wind tunnel until the 1940s, when a 40-by-80-foot (12 m × 24 m) tunnel was built at NASA Ames Research Center in California.

Early in 1945, the center expanded to include rocket research, leading to the establishment of a flight station at Wallops Island, Virginia. A further expansion of the research program permitted Langley Research Center to orbit payloads, starting with NASA's Explorer 9 balloon satellite in mid-February 1961. As rocket research grew, aeronautics research continued to expand and played an important part when subsonic flight was advanced and supersonic and hypersonic flight were introduced.

Langley Research Center can claim many historic firsts, some of which have proven to be revolutionary scientific breakthroughs. These accomplishments include the development of the concept of research aircraft leading to supersonic flight, the world's first transonic wind tunnels, training the first crews of astronauts, the Lunar Landing Facility providing the simulation of lunar gravity, and the Viking program for Mars exploration. The center also developed standards for the grooving of aircraft runways based on a previous British design used at Washington National Airport. Grooved runways reduce aquaplaning which permits better grip by aircraft tires in heavy rain. This grooving is now the international standard for all runways around the world.

Langley was also a contender for site NASA Mission Control, prior to the eventual selection of Houston, due to both Langley's prominence with NASA at the time, the large existing aerospace industry already present in the Hampton Roads region, and the proximity to Washington, DC. The selection of Houston actually took many higherups at Langley by surprise and caused some lingering controversy in the surrounding area over the loss and transfer of so many jobs to Houston. Though they had lost out on the Manned Space Center, Langley still played an important role in conducting research and training during the Apollo Program. 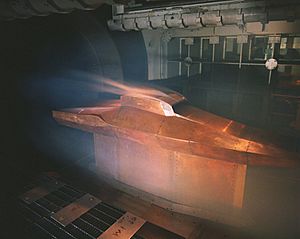 The EBF³ process produces structural metallic parts with immense strength. Additionally, the ability to build functionally graded, unitized parts directly from CAD data offers performance in most applications. Recently, LaRC has become home to this type of machining process, which is used by their new room-sized electron-emitting device, which uses a High Frequency 42 kW (56 hp), X-ray emitting electron gun (similar to Cathode Ray Tubes), which quickly melts either aluminum or titanium wire (positioned by dual independent wire feeders) into the desired 3-dimensional metallic parts with a material strength comparable to that of wrought products. The machine's deposition rate is 150 in3/h (680 cm3/ks) Metallic parts are also built directly from CAD without molds or tools, leaving the end product with absolutely no porosity.

LaRC also houses a large collection of various inexpensive plastic reformation machines. These machines are critical in the freeform fabrication department for faster timing, better precision, and larger quantities of low-cost toy, model, and industrial plastic parts. The fabrication of plastic parts is not all that dissimilar to the EBF³ process, except the melting apparatus is a thin, grated heating element, but other than that they are quite similar, e.g. they are both run completely by CAD data and deal with various freeform fabrication of raw materials. 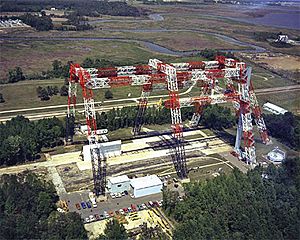 Since the start of Project Gemini, Langley was a center for training of rendezvous in space. In 1965, Langley opened the Lunar Landing Research Facility for simulations of Moon landings with a mock Apollo Lunar Module suspended from a gantry over a simulated lunar landscape. There was experimental work on some Lunar Landing Research Vehicles (LLRV).

All content from Kiddle encyclopedia articles (including the article images and facts) can be freely used under Attribution-ShareAlike license, unless stated otherwise. Cite this article:
Langley Research Center Facts for Kids. Kiddle Encyclopedia.