Crabtree Valley Mall is a regional mall located in Raleigh, North Carolina. At 1,326,000 square feet (123,200 m2), it is the largest enclosed mall in the Triangle. Crabtree Valley contains over 220 stores and is anchored by Belk, Sears, and Macy's. Higher-end restaurants located in the mall include The Cheesecake Factory, P. F. Chang's China Bistro, Kanki, Brio, Fleming's Prime Steakhouse & Wine Bar, and McCormick & Schmick's. It is the site of the first H&M store in North Carolina, which opened in spring of 2010. 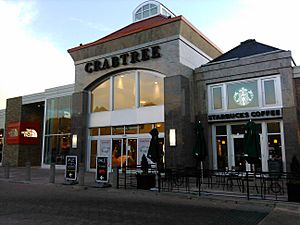 Crabtree Valley Mall opened in August 1972 at the intersection of US 70/NC 50 (Glenwood Avenue) and the I-440 Beltline. Original anchors were Hudson Belk, Sears, Miller & Rhoads and Thalhimer's. The mall also included G.C. Murphy, Treasury Drug and Piccadilly Cafeteria.

From the start, the mall pulled shoppers from all over central and eastern North Carolina. Many of them came to the 251,000-square-foot (23,300 m2) Hudson Belk, which is still the largest store in the complex and serves as a Belk flagship.The mall was remodeled in the mid-1980s and added many upscale specialty stores and a food court. It faced remarkably little competition in its market until the 1990s, when Cary Towne Center in nearby Cary doubled in size and spawned a companion mall, Crossroads Plaza.

To combat the threat of an expanded Cary Towne Center stealing business, Crabtree embarked on a major expansion starting in 1993. G.C. Murphy, Miller & Rhoads, and Piccadilly all closed down during this period. Thalhimer's converted to Hecht's, and began planning for a new, larger location at the mall. In 1993 a 40 by 110-foot (34 m) section of the parking deck collapsed just three months after it had been completely rebuilt. Sears closed its Crabtree store in 1994 and opened a new location adjacent to it in August 1994. The old Sears became small shop space and connected to a new, larger Hecht's which opened in August 1995.

The final piece of Crabtree's 1990s renaissance was the opening of North Carolina's first and only Lord & Taylor in November 1995 in the former Thalhimers/Hecht's. However, the store was closed in February, 2006, as part of the reorganization of May Department Stores that began in 2003. A separate Hudson Belk Men's Store filled the upper level of the former Lord & Taylor, and the lower level has been converted to small store space and new entrance.

A new parking deck east of Hudson Belk was completed in 2008. Part of the deck supports three new sit down restaurants that opened in late 2008. These were McCormick and Schmick's Seafood, Fleming's Prime Steakhouse and Bar and Brio Tuscan Grille.

Parking at the Crabtree Valley Mall is fairly unusual; there is very little at-grade parking. A multistory parking deck surrounds most of the mall, the sole exception being the northwestern side of the mall property, near Sears and Macy's. A surface parking lot serves these stores. The mall's protruding anchor tenants force drivers to take many turns in the parking deck to get to their desired destination. Valet parking is available at the mall's northeast entrance and outside the three restaurants atop the newest parking deck east of Hudson Belk.

The various sections of the deck have been known at times by color-coded names. These names are currently in use on the mall's website and on some signage:

When this color-coding system was first used in the mid-1990s, the current Blue Deck was then known as the Green Deck. This changed in the early 2000s, prior to construction of the current Green Deck.

For a time in the later 1990s, the sections of the parking deck were also known by the adjacent road. The then-Green Deck was known as the Glenwood Deck; the Red Deck, the Blue Ridge Deck; and the Gold Deck, the Creedmoor Deck.

Crabtree Valley Mall is situated next to Crabtree Creek, a tributary of the Neuse River that begins near Morrisville and winds through Umstead State Park as well as western and North Central Raleigh. Because the watershed around the mall have become increasingly covered with impervious parking lots the creek floods easily following major storms. Such floods occurred frequently in the mall's early years, but diminished with the construction of Lake Crabtree and large retaining basins upstream of the mall. However, the problem has returned and lower levels are still likely to flood during heavy rains in the summer months.

Heavy rains caused by the remnants of Tropical Storm Alberto flooded the lower level parking lots of the mall on June 14, 2006, as well as a great deal of the bottom level of anchor store Sears, forcing the mall to close for the day. A similar situation occurred with Hurricane Fran in 1996, when flood waters flowed through the first floor of the mall and caused a few stores to remain closed for nearly two months.

The lower level of the parking structure along with small parts of the main building have also flooded in 2013, March 2016 and, on July 16, 2016 when during an intense storm Crabtree creek rose 8 feet, closing some roads that surround the mall and flooding parking lots. The storm left dozens stranded and cars flooded.

In late October 1999, the mall was closed for nearly three hours after Crabtree Special police along with the Raleigh Police Department evacuated the mall to investigate a suspicious-looking black briefcase.

Mall police were alerted by a bystander who saw a person leave a black briefcase outside the lower level of the Glenwood Avenue entrance now known as the Red Deck before running away. After RPD cleared the briefcase by using a robotic device the mall was reopened. The owner of the briefcase was never found.

On May 27, 2000, Mall was closed after someone smelled the odor of natural gas. The mall closed around 7:30 before the Raleigh Fire Department began investigating the scene to locate the cause of the leak. The mall reopened the following morning after The RFD found the source of the leak which was a bank of gas boxes outside of Sears. The Boxes are used for heating, so they were not being used at the time. They were shut down and repaired.

In December 2014, three men armed with hammers smashed the glass at Sidney Thomas Jewelers before grabbing the jewelry that laid within them and ran out of the mall leaving walking on the grand behind them

In December 2015, a Crabtree officer was the victim of an attempted assault after he stopped a man from breaking into a car in the mall parking garage.

At 2:45 p.m. on August 13, 2016, the Raleigh Police Department received multiple 911 calls, reporting that shots had been fired near Lush. The mall was placed into lockdown. Several roads around the mall, including Glenwood Avenue and parts of NC 50 known in the area as Creedmoor Road were closed. Eight people were sent to the hospital for injuries sustained while trying to flee the mall. GoRaleigh Buses were deployed to help evacuate people from the immediate area of the mall, while those who couldn't board buses were forced to wait in the parking lot of a nearby Marriott. Those who couldn't leave the inside of the mall were told to shelter in place in stores like GameStop, H&M, and Macy's. As of 6:20 pm August 14, 2016, no shooter, shell casings or weapons have been found, though what's thought to be bullet holes were found in the ceiling by the upper floor food court.

In November or 2011, six protesters with connections to the anti-Wall Street group "Occupy" were arrested for protesting in the mall's food court. Earlier in the day, Crabtree officials told the group that they could not demonstrate on mall property; The Raleigh Police offered to watch oversee a protest on public sidewalks next to the mall.

In April 2012, Producers from Iron Man 3 held an open casting call for the movie. Thousands showed up to Crabtree to get their chance to be in the final chapter of the Iron Man trilogy.

Starting in 2012 popular Fox shows The X Factor and American Idol held auditions at Crabtree. The practice stayed in place until the end of the shows in 2013 and 2015.

All content from Kiddle encyclopedia articles (including the article images and facts) can be freely used under Attribution-ShareAlike license, unless stated otherwise. Cite this article:
Crabtree Valley Mall Facts for Kids. Kiddle Encyclopedia.