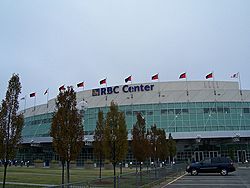 PNC Arena, when it was called the RBC Center

PNC Arena is a sports arena in Raleigh, North Carolina. The arena opened on October 29, 1999, and is the current home to the Carolina Hurricanes of the National Hockey League (NHL) and North Carolina State University Wolfpack men's basketball. The arena was originally known as Raleigh Entertainment & Sports Arena until RBC Bank, the U.S. division of the Royal Bank of Canada, acquired naming rights for 20 years, which cost a reported $80 million. The name then changed to RBC Center. The arena was also host to many WWE events such as SummerSlam in 2000 and No Mercy in 2006. In 2011, the Royal Bank of Canada sold RBC Bank to PNC Financial Services, and the arena's name was officially changed to PNC Arena on March 15, 2012.

All content from Kiddle encyclopedia articles (including the article images and facts) can be freely used under Attribution-ShareAlike license, unless stated otherwise. Cite this article:
PNC Arena Facts for Kids. Kiddle Encyclopedia.