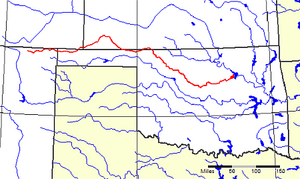 The Cimarron River (highlighted in red) flows through four states in the American West.

The Cimarron River extends 698 miles (1,123 km) across New Mexico, Oklahoma, Colorado, and Kansas. The headwaters flow from Johnson Mesa west of Folsom in northeastern New Mexico. Much of the river's length lies in Oklahoma, where it either borders or passes through eleven counties. There are no major cities along its route. The river enters the Oklahoma Panhandle near Kenton, Oklahoma, crosses the southeastern corner of Colorado into Kansas, reenters the Oklahoma Panhandle, reenters Kansas, and finally returns to Oklahoma where it joins the Arkansas River at Keystone Reservoir west of Tulsa, Oklahoma, its only impoundment. The Cimarron drains a basin that encompasses about 18,927 square miles (49,020 km2).

In Oklahoma it is further joined by North Carrizo Creek north-northeast of Kenton, Tesesquite Creek further to the east of Kenton, and South Carrizo Creek yet further to the east. It additionally joins with Cold Springs Creek, Ute Canyon Creek, and Flagg Springs Creek before crossing into Kansas. The river flows along the southern edges of Black Mesa, Oklahoma's highest point. As it first crosses the Kansas border, the river flows through the Cimarron National Grassland.

The Cimarron's water quality is rated as poor because the river flows through natural mineral deposits, salt plains, and saline springs, where it dissolves large amounts of minerals. It also collects quantities of red soil, which it carries to its terminus. Before the Keystone Dam was built, this silt was sufficient to discolor the Arkansas River downstream.

The first Europeans to see the Cimarron River were apparently Spanish conquistadores led by Francisco Vásquez de Coronado in 1541. The Spanish seem to have done little to exploit the area. The Osage tribe claimed most of the territory west of the confluence of the Cimarron and the Arkansas. In 1819 Thomas Nuttall explored the lower Cimarron and wrote a report describing the flora and fauna that he found there. In 1821 Mexico threw off Spanish rule and William Becknell opened the Santa Fe Trail. 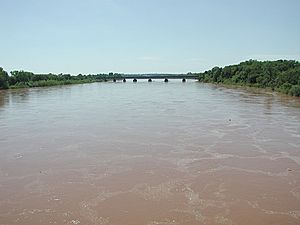 All content from Kiddle encyclopedia articles (including the article images and facts) can be freely used under Attribution-ShareAlike license, unless stated otherwise. Cite this article:
Cimarron River (Arkansas River tributary) Facts for Kids. Kiddle Encyclopedia.