Bartlesville is the primary city of the Bartlesville Micropolitan area, which consists of Washington County and had a population of 51,843 in 2018. A small portion of the city is in Osage County. The city is also part of the Tulsa Combined Statistical Area, with a population of 1,151,172 in 2015.

It is one of two places in Oklahoma where a Lenape Native American tribe lives, the other being Anadarko.

Jacob Bartles, son-in-law of Delaware chief Charles Journeycake, moved from Wyandotte County, Kansas to Indian Territory in 1873. He settled first at Silver Lake, a natural lake south of the present city of Bartlesville. In 1874, he opened a trading post and post office on Turkey Creek, in what is now East Bartlesville. In the following year, he bought a grist mill on the Caney River and modified it to produce flour. Bartles then built a two-story general store and residence, and added a rooming house, a blacksmith shop and a livery stable. Other settlers soon moved into the immediate area, which was then called Bartles Town. In 1880, Bartles moved his Turkey Creek post office to this town. Bartles then provided the community with electricity, a telephone system and a water distribution system.

Development of the present city began after William Johnstone and George B. Keeler opened a general store on the south side of the Caney River in 1884. The first newspaper, The Weekly Magnet, began publication in March 1895. The town was incorporated in Indian Territory in January 1897. The town was surveyed and platted in 1898, and eighty acres were offered to the Atchison, Topeka and Santa Fe Railroad for a depot. The railroad reached the town in 1899. The post office was moved from "North Bartlesville" in 1899. Bypassed by the railroad, Jacob Bartles moved his store to Dewey, Oklahoma.

In 1957, Bartlesville was the test site for the first experiment in pay cable television. The Bartlesville Telemovie System debuted with The Pajama Game, starring Doris Day, and aired it to an audience of 300 homes. The headline of the September 4, 1957 issue of Variety read "First-Run Films Now at Home". 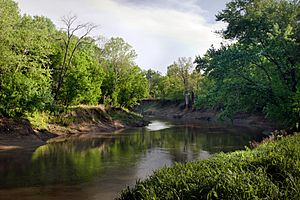 The Caney River flows through Bartlesville separating the downtown area from the east side. The river flooded in October 1986 due to above average rainfall. The city was split in half for several days and the flood caused considerable property damage. The river left its banks again in June 2007, cresting five feet below the 1986 crest.

Bartlesville is familiar with both very hot conditions in the summer with a record high of 115 °F or 46.1 °C and with very cold conditions with a record of low of −28 °F or −33.3 °C. However, even with this record of extremes, the climate of Bartlesville is considered humid subtropical (Köppen Cfa) with relatively mild winters and hot summers, with the majority of precipitation falling in spring, between the months of April and June. Bartlesville lies in Tornado Alley, meaning that severe weather, including tornadoes, can occur. Severe weather occurs most often in the spring months, and occurs with much less frequency throughout the rest of the year. 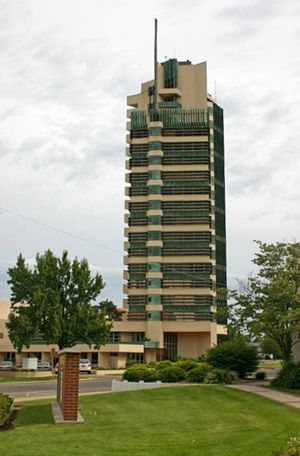 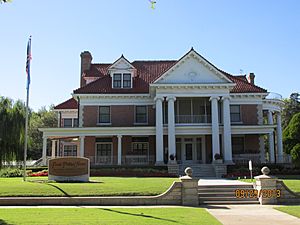 Price Tower, designed by Frank Lloyd Wright, stands in downtown Bartlesville. It is the only realized skyscraper by Wright, and is one of only two vertically oriented Wright structures extant (the other is the S.C. Johnson Wax Research Tower in Racine, Wisconsin). The nearby Bartlesville Community Center, designed by William Wesley Peters, one of Wright's students, hosts the "OK Mozart" International Festival, an annual week-long music event in June. Begun in 1985 organized around the music of Wolfgang Amadeus Mozart, the festival features performances of classical, jazz, light opera, and more. World-renowned musicians who have performed at OK Mozart include Itzhak Perlman, Joyce Yang, Joshua Bell, and André Watts. The Community Center also hosts the Bartlesville Community Concert Association's concert lineup.

The city also hosts several annual festivals and shows, nearly all focused in the downtown. Sunfest is scheduled the first weekend of June. It includes an arts and crafts show, a music festival, a kids festival, and a classic cars show in Downtown. A second classic air show and festival in the fall. An Oklahoma Indian Summer Festival held at the Community Center in Downtown Bartlesville each fall.

Bartlesville's downtown revitalization efforts are in full swing, with many blocks of National Register Historic District, and the catalyst project, the once burned out May Brothers and 1904 Buildings are coming to completion at the downtown's center. The original Kress Building has been taken over by Bartlesville Monthly Magazine and restored with the Frank Phillips Club on the first floor. The original Jane Phillips Memorial Hospital is about to undergo historic preservation for re-use as lofts, as downtown Bartlesville is so full of young professionals that the many developed historic lofts all have a long waiting list, and nearly twenty new retail and restaurant businesses have recently located in the downtown, including Indian Coffee, Lubella's Boutique, and Oklahoma's famous Hideaway Pizza. Downtown Bartlesville Inc., the Bartlesville Redevelopment Trust Authority, the Bartlesville Convention & Visitors Bureau and the Bartlesville Development Authority work in tandem to promote this thriving "Next City" in Oklahoma downtown redevelopment in a City rich in oil history and energized for the future with the highest job growth in Oklahoma.

Frank Phillips' former home in Bartlesville is a museum maintained by the Oklahoma Historical Society. His ranch and retreat about 10 miles (16 km) southwest of Bartlesville is called Woolaroc (a portmanteau of the words woods, lakes, rocks). A working ranch of 3,700 acres (1,500 ha), Woolaroc houses a museum exhibiting Phillips' extensive Native American, western, and fine art collections. It holds one of the most complete private collections of Colt firearms in the world. The property includes the Phillips family's lodge and mausoleum, along with a huge wildlife preserve with herds of American bison, elk, Texas longhorn cattle, water buffalo, zebra, and more than 20 other animal species.

A Wall of Honor is located inside Washington Park Mall, with names of service members listed on panels beside cabinets that display military artifacts, photos, story boards, POW/MIA listings, and other exhibits. A special display honors Lance Corporal Thomas A. Blair, Oklahoma's first casualty during the Iraq War.

Bruce Goff designed Shin'enKan ("The House of the Far Away Heart") in 1956. Built for Joe D. Price as his house and studio, it was destroyed by fire in December 1996. However, Bartlesville is the home of multiple other Bruce Goff architectural masterpieces, a home for the Price Pipe and Supply Family, by Frank Lloyd Wright, and numerous homes by the famous Kansas City Architect, Edward Delk. The Conference Basketball tournament for The Great American Conference is hosted in Bartlesville OK.

Oklahoma's first commercial oil well, the Nellie Johnstone, discovered oil on 15 April 1897 along a bank of the Caney River, near Bartlesville.

Before its merger with Conoco, Phillips Petroleum Company had its headquarters in Bartlesville. After ConocoPhillips formed, the combined company established a global systems and services office in Bartlesville. ConocoPhillips spun most of its operations not related to exploration and production to form a new company, Phillips 66, in 2012. The two companies combined employ or contract with more than 3,800 people in the area. Chevron Phillips also has an office here.

Phillips Petroleum had a large presence in Bartlesville. A writer for the Tacoma (Wash.) News Tribune said, "I never quite understood why the town where I spent my high school years wasn't named Phillipsburg. Nearly everything else in town was named after the Phillips Petroleum company or its founder".

Career and technical training is provided by Tri County Technology Center, which offers several programs for high-school and adult students along with short-term courses. In December 2018, Tri-County Tech was recognized for performance excellence as one of the recipients of the Malcolm Baldrige National Quality Award.

Bartlesville is served by two US Highways and one Oklahoma state highway:

Bartlesville Municipal Airport sits on the city's west side on US-60 in Osage County. It is a single-runway airport. Runway 17/35 is a concrete runway that is 6,850' by 100'. It has terminal and fixed-base operations and is owned by the City of Bartlesville.

Bartlesville is served by the South Kansas & Oklahoma Railroad ("SKOL"), a shortline carrier of Watco headquartered in Pittsburg, Kansas. The line comes into Bartlesville from the north, crossing the trestle over the Caney River. It continues southwest to the west of downtown and exits Bartlesville at the trestle to the south near East 23rd Street.

This line was the Atchison Topeka & Santa Fe until it merged with Burlington Northern to form the Burlington Northern & Santa Fe. The line was to be abandoned, leaving Bartlesville and Washington County without rail service. The line comes into Washington County to the north from the nearby town of Caney, Kansas, then runs through Copan, Dewey, Bartlesville, Ochelata, Ramona, and Vera into Collinsville, Owasso, and Tulsa. The switch to the BNSF Cherokee Subdivision is just west of North Greenwood Avenue in Tulsa. There are no Class 1 Railroads in Bartlesville or Washington County. The line at one time had passenger service and the depot downtown on SW. Keeler Avenue at 2nd Street was a full-time passenger and freight depot.

All content from Kiddle encyclopedia articles (including the article images and facts) can be freely used under Attribution-ShareAlike license, unless stated otherwise. Cite this article:
Bartlesville, Oklahoma Facts for Kids. Kiddle Encyclopedia.