The town was the home of an all-Native American football team in the 1920s. Parts of a docudrama on the Hominy Indians were shot in the area in 2013. 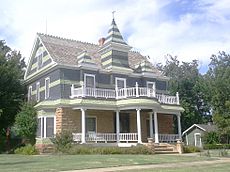 The town was incorporated in 1908, though the initial settlement developed in the late 1880s.

From the early 1920s to 1932, Hominy was home to a professional football team composed of Native American players.

The Hominy Indians defeated the New York Giants in 1927, just after the Giants were named champions of the National Football League. The team had a 28-game winning streak at one point during its existence, but was disbanded due to the onset of the Great Depression. A screening of the movie "Playground of the Native Son," based on the events of the team was screened Oct. 10, 2014, at Circle Cinema, Tulsa's non-profit and independent theater.

A medium security prison was constructed in Hominy at the price of $12.8 million and received its first inmates in August 1979. It was originally named the Jess Dunn Correctional Center in honor of a warden killed in an escape attempt. A 1977 joint resolution renamed the facility the Dick Conner Correctional Center. The facility reached its original design capacity of 400 during the spring of 1980.

The prison was badly damaged by a riot that took place on August 29 and 30, 1983. A riot proclamation was issued by then Governor George Nigh on August 30. The inmates torched the buildings adjacent to the kitchen and completely destroyed the library, school, and church area. All of this resulted in the death of an inmate and damages of $3 million. The first special session of the 39th Legislature re-appropriated nearly $2.5 million to fund reconstruction of the facility.

Sports and other activities

The Hominy Bucks, whose colors are purple and white and whose mascot is a Buck (a Native American warrior - NOT a deer), have produced several boys and girls championship teams as well as individual athletes and performers who have had outstanding careers over the years.

The Arkansas River Rivalry is played every year between Hominy and Cleveland High Schools and is one of the oldest rivalries in the state, dating back to 1922. The Battle of the Osage is the rivalry game between Hominy and Pawhuska and has also been played nearly annually since 1922.

Hominy's football teams have produced several notable athletes in its history of athletics. Reuben Deroin played for Oklahoma State University in the 1950s. Kenny Rader was Hominy's first All-State football player as well as earning Prep All-American honors in 1960. Rader went on to play football for Tulsa University. Running back Harry Roy Red Eagle, who signed with Kansas University, was selected to the Oklahoma All-State football team and the high school Prep All-American Team in 1961. Unlike today, in the early 60's there was only one high school All-American team in the United States. Red Eagle is also the only player from Hominy High School to have his jersey number (#30) retired in 1961; running back Bob Hudson was another stellar player whose family produced a number of great athletes that have played for the Bucks. Hudson played for the Green Bay Packers in 1972 and the Oakland Raiders 1973-1974; defensive back Jesse Hudson played for the New York Giants in 1977; former University of Oklahoma defensive back Scott Garl; defensive back Mike Hudson played collegiately for the Oklahoma State Cowboys and for the San Diego Chargers in 1987. Hominy's current head football coach Scott Harmon played defensive back at Oklahoma State University as well.

Hominy's Boys Basketball Teams have also had success on the court and have won two state championship titles in 1945 and 1982. The 1982 state championship team was coached by Don Sloan. Buck basketball players Amos Shadlow Jr. and Steven Lookout played collegiality for the University of Tulsa's Golden Hurricane squads. The Lady Bucks have also seen many of its former players go on to play at the collegiate level, including Chrissie Frazier Fairweather (Oklahoma State University).

Along with producing numerous individual state champions the Hominy Boys Track and Field teams have produced four state team titles which were won in 1976, 1981, 1983 and 2000.

The athletic programs have seen many Bucks and Lady Bucks garner All-State recognition in football, basketball, and track.

Hominy's Baseball Teams have been competitive over the years producing players like Marques Davis who played at Oklahoma State University in 1997.

The town's economy is largely based in oil production and agriculture. Major job providers in the area are the Dick Conner Correctional Center and Osage Casino-Hominy as well as Cleveland Walmart.

Hominy is home to a medium security facility for men that was opened in 1979. The Dick Conner Correctional Center is named for former Oklahoma State Penitentiary warden and Osage County sheriff R.B. "Dick" Conner.

Hominy, northwest of Tulsa, is at the intersection of SH-20 and SH-99.

Commercial air service is available out of Tulsa International Airport, about 42 miles southeast.<

Trains no longer run through Hominy, but the route has been converted to the Katy Trail.

All content from Kiddle encyclopedia articles (including the article images and facts) can be freely used under Attribution-ShareAlike license, unless stated otherwise. Cite this article:
Hominy, Oklahoma Facts for Kids. Kiddle Encyclopedia.