Butler County (county code BU) is a county located in the southern portion of the U.S. state of Kansas. As of the 2010 census, the county population was 65,880. Its county seat and most populous city is El Dorado.

In 1855, Butler County was founded. It was named in honor of a U.S. Senator from South Carolina, Andrew Butler (1796–1857), who was one of the authors of the Kansas-Nebraska Act of 1854 and a strong advocate of Kansas becoming a slave state.

In 2010, the Keystone-Cushing Pipeline (Phase II) was constructed north to south through Butler County (near Potwin, Towanda, Augusta, Douglass), with much controversy over tax exemption and environmental concerns (if a leak ever occurs). A pumping station named Burns was built 2 miles north of Potwin, and new power lines were built from a high-voltage line 0.3 mile east of De Graff. 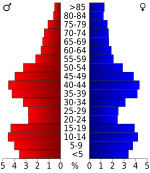 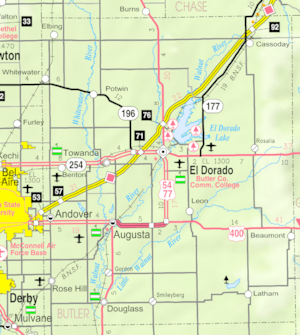 Butler County is divided into twenty-nine townships. The cities of Augusta and El Dorado are considered governmentally independent and are excluded from the census figures for the townships. In the following table, the population center is the largest city (or cities) included in that township's population total, if it is of a significant size.

All content from Kiddle encyclopedia articles (including the article images and facts) can be freely used under Attribution-ShareAlike license, unless stated otherwise. Cite this article:
Butler County, Kansas Facts for Kids. Kiddle Encyclopedia.