Whitewater is a city in Butler County, Kansas, United States. As of the 2020 census, the population of the city was 661.

The city originally formed several miles to the east. A post office was established as White Water (as two words) on August 7, 1871. The post office was renamed to Ovo on July 7, 1882.

Between 1885 and 1888, several buildings were moved to the present location on the Whitewater River after the Missouri Pacific railroad came through the area. The city was established where the Missouri Pacific and Rock Island railroads intersected. The post office was renamed to White Water on May 15, 1888.

The historic Oak Lawn Farm Dairy Barn was built near Whitewater in 1926.

On November 1, 1950, the post office name was changed to Whitewater (one word).

In 1961, Frederic Remington High School was built immediately north of Brainerd. Leading up to this new school, Whitewater, Potwin, Brainerd, Elbing, Furley, Countryside, and Golden Gate schools merged to form a joint rural high school. Heated opposition between Whitewater and Potwin occurred during the discussion for the location of the new high school. Rural voters pushed for a centralized location in neither town. A public vote was passed to build the new school near Brainerd.

There were 254 households, of which 37.8% had children under the age of 18 living with them, 60.2% were married couples living together, 8.7% had a female householder with no husband present, 5.5% had a male householder with no wife present, and 25.6% were non-families. 23.6% of all households were made up of individuals, and 9.5% had someone living alone who was 65 years of age or older. The average household size was 2.60 and the average family size was 3.05.

The community is served by Remington USD 206 public school district. The Remington High School mascot is a Bronco. 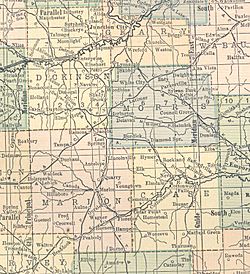 All content from Kiddle encyclopedia articles (including the article images and facts) can be freely used under Attribution-ShareAlike license, unless stated otherwise. Cite this article:
Whitewater, Kansas Facts for Kids. Kiddle Encyclopedia.