Kids Encyclopedia Facts
Not to be confused with Sedgwick, Kansas.

Sedgwick County (county code: SG) is a county located in the U.S. state of Kansas. As of the 2010 census, the population was 498,365, making it the second-most populous county in Kansas. The county seat is Wichita, the most populous city in the state. 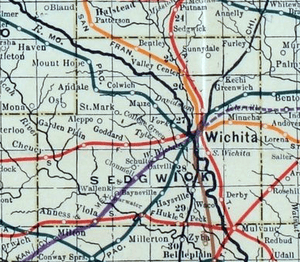 Sedgwick County was founded in 1867, and named after John Sedgwick, who was a Major General in the Union Army during the American Civil War.

Sedgwick County was the setting for the murders committed by the BTK strangler from 1974 until 1991. 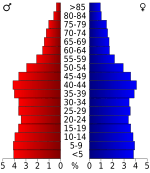 The following public-use airports are located in Sedgwick County:

The following are closed airports: 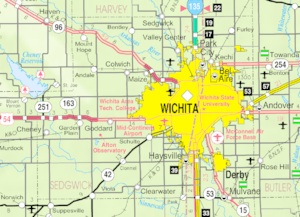 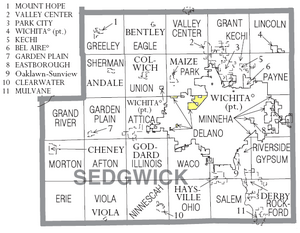 Map of Townships in Sedgwick County

Sedgwick County is divided into twenty-seven townships. The cities of Bel Aire and Wichita are considered governmentally independent and are excluded from the census figures for the townships. In the following table, the population center is the largest city (or cities) included in that township's population total, if it is of a significant size. The county use to have one more township, Wichita Township, but it no longer exists.

All content from Kiddle encyclopedia articles (including the article images and facts) can be freely used under Attribution-ShareAlike license, unless stated otherwise. Cite this article:
Sedgwick County, Kansas Facts for Kids. Kiddle Encyclopedia.