Kids Encyclopedia Facts
Not to be confused with Douglas County, Kansas.

Douglass is a city in Butler County, Kansas, United States. As of the 2020 census, the population of the city was 1,555.

The first settlement was made at Douglass in 1869. Douglass is named for its founder, Joseph W. Douglass, a storeowner who was fatally shot at the town site in 1873 while apprehending a suspected thief. Douglass was incorporated as a city of the third class in 1879.

In 2010, the Keystone-Cushing Pipeline (Phase II) was constructed about 1.8 miles west of Douglass, north to south through Butler County.

The climate in this area is characterized by hot, humid summers and generally mild to cool winters. According to the Köppen Climate Classification system, Douglass has a humid subtropical climate, abbreviated "Cfa" on climate maps.

There were 625 households, of which 40.0% had children under the age of 18 living with them, 52.8% were married couples living together, 13.1% had a female householder with no husband present, 6.4% had a male householder with no wife present, and 27.7% were non-families. 24.5% of all households were made up of individuals, and 11.3% had someone living alone who was 65 years of age or older. The average household size was 2.68 and the average family size was 3.18. 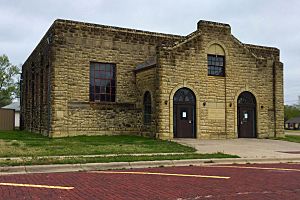 The community is served by Douglass USD 396 public school district.

All content from Kiddle encyclopedia articles (including the article images and facts) can be freely used under Attribution-ShareAlike license, unless stated otherwise. Cite this article:
Douglass, Kansas Facts for Kids. Kiddle Encyclopedia.