Harper County is a county located in the U.S. state of Oklahoma. As of the 2010 census, the population was 3,685, making it the fifth-least populous county in Oklahoma. The county seat is Buffalo. It was created in 1907 from the northwestern part of Woodward County, and named for Oscar Green Harper, who was clerk of the Oklahoma Constitutional Convention.

During the late 19th Century, the area now known as Harper County was part of the Cherokee Outlet, reserved for use by the Cherokee Nation by treaties in 1828 and 1835, The U.S. government opened the outlet for settlement by non-Indians in 1893. The area was divided into counties after the formation of what is now the state of Oklahoma. Harper County was created in 1907. It was named for Oscar Green Harper, who was a local resident, school teacher, and served as clerk of the Oklahoma Constitutional Convention.

The present county lay on several trails that were blazed during the 19th Century. One of the most significant was the Fort Dodge to Camp Supply Military Trail. It was used followed in 1868 by the U.S. Army's Seventh Cavalry, to move men and supplies to build Camp Supply (forerunner of the present town of Fort Supply, Oklahoma). The Great Western Trail (also known as the Dodge City Trail) was first used between South Texas and Fort Robinson, Nebraska, in 1874.The Cimarron Valley Turnpike Company built a bridge over the Cimarron River in 1908 to facilitate travel between Englewood, Kansas and Oklahoma.

A 1908 election was held to determine whether Buffalo or Doby Springs would become the county seat. Buffalo won the election. Doby Springs later ceased to be a town and is now a park in Buffalo. Other ghost towns in the county are Paruna, Flat, Avis, Readout, Cross, Alto, Cupid, and Stockholm.

Railroads first came to Harper County in 1912, when the Wichita Falls and Northwestern Railway, a subsidiary of the Missouri, Kansas and Texas Railway (MK&T), built a line through Dunlap, May, Laverne, and Rosston. The locally owned Buffalo and Northwestern Railroad (B&NW), connected Buffalo with Waynoka in 1919-20. The Atchison, Topeka and Santa Fe Railway acquired the B&NW in 1920. The MK&T line was abandoned in 1970. 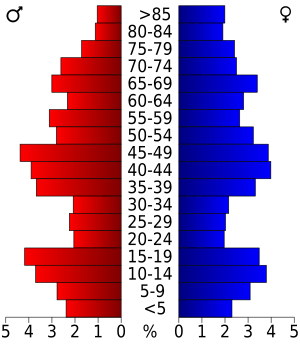 Age pyramid for Harper County, Oklahoma, based on census 2000 data.

All content from Kiddle encyclopedia articles (including the article images and facts) can be freely used under Attribution-ShareAlike license, unless stated otherwise. Cite this article:
Harper County, Oklahoma Facts for Kids. Kiddle Encyclopedia.