Seminole County is a county located in the U.S. state of Oklahoma. As of the 2010 census, the population was 25,482. Its county seat is Wewoka. Before Oklahoma's admission as a state, the county was the entire small portion of Indian Territory allocated to the Seminole people, who were removed from Florida in the 1820s.

Seminole County is notable for the Greater Seminole Field, one of the most important oil fields ever found, which is still producing. It extends into nearby counties. In the early years of the oil boom, workers and adventurers flooded into the county, rapidly tripling the population. As oil production later declined, jobs and residents left.

Seminole County has been an important part of the Oklahoma and United States petroleum industry for over 80 years. The Greater Seminole Field was one of the most important oil fields ever found and is still producing. Discovered one field after another in 1926, it contained an estimated 822,000,000 barrels (130,700,000 m3) of oil. To group the fields together, the oil companies decided to come up with a name, and this was suggested by Paul Hedrick, oil editor of the Tulsa World. Other important oil fields in the area were the Cromwell oil field, discovered in 1923, and the Maud oil field. The Maud field, discovered in 1927 by Amerada Petroleum, was the first discovery using reflection seismology. This marked the beginning of the use of modern geophysical methods in the petroleum industry.

The Seminole County Courthouse was built in 1927. 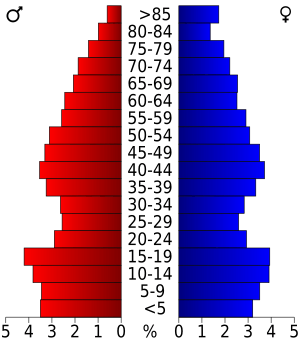 Age pyramid for Seminole County, Oklahoma, based on census 2000 data.

All content from Kiddle encyclopedia articles (including the article images and facts) can be freely used under Attribution-ShareAlike license, unless stated otherwise. Cite this article:
Seminole County, Oklahoma Facts for Kids. Kiddle Encyclopedia.