Allen is a town in Hughes and Pontotoc counties in the U.S. state of Oklahoma. The population was 932 at the 2010 census.

Allen is located on State Highway 1 about 19 miles (31 km) northeast of Ada, which is the county seat of Pontotoc County.

According to the United States Census Bureau, the town has a total area of 0.9 square miles (2.4 km²), all land.

There were 384 households, out of which 28.9% had children under the age of 18 living with them, 51.6% were married couples living together, 9.4% had a female householder with no husband present, and 35.4% were non-families. 32.3% of all households were made up of individuals, and 19.8% had someone living alone who was 65 years of age or older. The average household size was 2.39 and the average family size was 3.03. 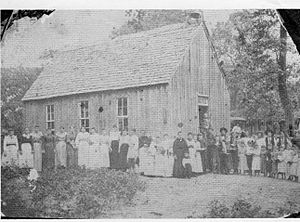 The town was founded in 1883 by a group of white settlers who had arrived in Choctaw Nation, Indian Territory in 1882 from Gainesville, Texas, led by Confederate Army veteran Doctor John Trigg Gilmore, his wife, Elizabeth Louise Oliveaux, their children, and relatives William and George McCall, with their respective families. They first settled in Cold Springs, northwest of the present town site, where other settlers soon joined them. The first log cabin was built in Allen in 1883, and this building was used as both a school and church. The town was named after the son of deputy United States marshal William McCall.

The Missouri, Oklahoma, and Gulf Railway built a line through the area in 1909, although it bypassed Allen, by a half-mile.

The Allen Advocate is a weekly newspaper published on Thursday in Allen. The newspaper is published by the Robinson Publishing Company, founded in 1982, by Bill and Dayna Robinson. The company also publishes the Coalgate Record Register and the Holdenville Tribune.

All content from Kiddle encyclopedia articles (including the article images and facts) can be freely used under Attribution-ShareAlike license, unless stated otherwise. Cite this article:
Allen, Oklahoma Facts for Kids. Kiddle Encyclopedia.