Founded by a Freedman, John Horse, and Black Seminoles in January, 1849, Wewoka is the current capital of the Seminole Nation of Oklahoma. 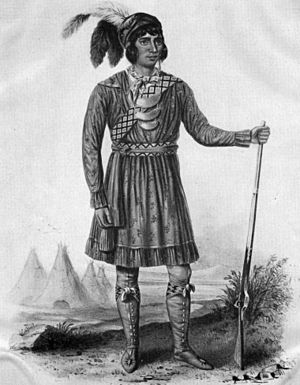 The city my have been named for the wife of Osceola. (1838 lithograph)

Wewoka's history begins with Freedman John Horse, who was also known as Gopher John. In the spring of 1849, Horse and a group of Black Seminoles founded a settlement near modern-day Wewoka. Seeking safety and autonomy from the Creek Nation, they established a community located at the falls of a small stream, lying in the fertile lands between the North and South Canadian Rivers. The steady rush of water over the falls gave rise to the name We-Wo-Ka – meaning "Barking Water" in the Mvskoke (Seminole) language. Other historians claim he named the settlement Wewokea after Osceola's second wife who was of both Seminole and African ancestry.

In autumn of 1849, Horse and Seminole chief Wild Cat led Seminole families into Mexico to avoid the attempts of slavers to raid families and capture people of African descent. The Mexican government offered Wild Cat, Horse and other Seminoles land in Mexico if they could rid the land of renegades who were terrorizing Mexican citizens. Wild Cat was the next hereditary chief of the Seminole Nation but the government appointed its first chief John Jumper instead. The descendants of Wildcat and his band were split for a time between Wewoka, Texas, and Mexico until 1918.

The city was founded in 1866 when Elijah J. Brown, an employee of the federal government led Seminole refugees from Leroy, Kansas to Indian Territory. During the American Civil War, the Seminole Nation had sided with the Confederacy, although many tribe members fled to the relative safety of Kansas, where they remained for the duration of the war. In 1866, after the Confederacy surrendered, the United States government required the Seminole Nation to sign a new treaty, which required them to emancipate their slaves, give freedmen who wanted to stay in the territory full rights as citizens, including voting in the tribe. Brown led the refugees back to Wewoka, here he built himself a house and established a trading post. Freedmen settled in Wewoka along with the Seminole and Elijah Brown was the only legal white settler in the town. The trading post had several subsequent proprietors before it was bought by two Seminole brothers, John Frippo Brown and A. J. Brown, and became the Wewoka Trading Company in 1891. Rev. James Ross Ramsey, a Presbyterian missionary, founded the Ramsey Mission (considered the first school in present Seminole County) in 1866. A post office was established on May 13, 1867 with E. J. Brown as first postmaster. The Seminole Nation made Wewoka their capital city and Seminole Governor John Brown had a log house erected at Wewoka as the Seminole capitol in 1877.

During the existence of the Seminole Nation as a political entity, the federal government was required by treaty to make payments directly to qualified tribe members. A popular sight was the pay wagon, accompanied by several armed Seminole light horsemen who rapidly unloaded the gold bullion, silver coins and paper money, and make a mad dash from the train station to the Wewoka Trading Company building, where it was delivered to A. J. Brown, who was also the Treasurer of the Seminole Nation. Brown kept the bulk payment in the company vault until he distributed it directly to the proper recipients.

The Choctaw, Oklahoma and Gulf Railroad (C O & G) built a railroad line from McAlester to Oklahoma City that passed through Wewoka.

The city was formally platted in 1897. The Seminole National Council ordered that decreed that the lots could be sold only to American Indians. However, the decision was overturned in 1902 and sales were opened to white settlers.

In 1907, Wewoka became part of the state of Oklahoma, which was admitted to the union. In 1908 it was designated as the county seat of Seminole County, Oklahoma, winning out in an election against the city of Seminole, Oklahoma. Early newspapers were the Wewoka Herald, Wewoka Democrat, and the Seminole County Capital.

The city developed around the house that Andrew Jackson Brown and his wife Mannie Lou built at 11th Avenue and Muskogee. Brown was the brother of Seminole Governor John Brown and the two owned and operated the Wewoka Trading Company. They were prominent Seminole of Creek and Scottish ancestry. Descendants included two prominent Seminole chiefs, Lucy Brown McKellop and her husband John F. McKellop. The house still stands, the last remaining structure of the Nineteenth Seminole Republic. It straddles the border between the Seminole and Creek nations and is listed on the National Register of Historic Places.

In March 1923, oil was discovered a mile and a half southeast of Wewoka. R. H. Smith drilled the first commercial well in 1923 on St. Patrick's Day. Great wealth was realized by many Seminole in 1925 with the exploration of the Magnolia Petroleum Company. In the 1920s and 30's the great Seminole Oil Fields were the largest suppliers of oil anywhere in the world. In 1925 the population of Wewoka was 1,520. By 1927 the population increased to over 20,000, as adventurers and workers came, to make their fortunes. It rapidly had become the third-largest city in Oklahoma.

From 1927 to the present, the oil companies took out as much as they could get. As the oil decreased, jobs and people left the city. By 1950 the population of Wewoka was 6,753 and in 1960 it was 6,300. The population continued a steady decline, but the city has continued as the commercial center of the region. The 1980s and 1990s were difficult for the city. Businesses left town and poverty greatly increased.

The city leaders tried to protect themselves by refusing to allow competition, like Wal-Mart, to enter the city. Holdenville and Seminole do have Wal-Mart stores. Seminole's Wal-Mart has the super-center configuration offering groceries as well as dry goods.

The crime rate in Wewoka during the 1980s increased; the radio commentator Paul Harvey called Wewoka "Little Chicago," because it had a higher crime rate per capita than the city of Chicago. The violence in the city caused people to avoid coming to Wewoka and gave the city a reputation that continues to linger.

By the mid 1990s, new leadership began to turn commerce around in the city. The police force was increased and began to get the crime rate under control. The crime rate by 2001 was below average for the state of Oklahoma. The historic downtown received a face lift of new sidewalks, streets, lights and flowers. Wewoka was selected as one of Channel 5's Top Five Cities in 2004.

The city of Wewoka continues to work to attract businesses and maintain population. The current population of Wewoka is just over 3,500. The projections show that the city will continue to decrease in the coming years. The ethnic diversity continues, with 52% white, 22% American Indian and 18% African American. The average household income is approximately $37,000 a year, a substantial increase over 2002. According to the demographic comparison, the number of households is decreasing, but the income of those living in Wewoka is increasing.

According to the United States Census Bureau, the city has a total area of 4.8 square miles (12.5 km2).None of the area is covered with water.

There were 1,390 households out of which 30.1% had children under the age of 18 living with them, 40.0% were married couples living together, 19.0% had a female householder with no husband present, and 36.4% were non-families. 33.4% of all households were made up of individuals and 18.3% had someone living alone who was 65 years of age or older. The average household size was 2.45 and the average family size was 3.14.

In 1941, as part of the New Deal projects of the Works Progress Administration, Marjorie Rowland Clarke won a federal commission from the Section of Painting and Sculpture′s projects, later called the Section of Fine Arts, of the Treasury Department to paint a mural for the Wewoka post office. The painting, Historical Background of Wewoka can still be seen in the building.

The Seminole National Museum opened in 1974, after about ten years of planning by the Seminole community in Oklahoma. It is housed in a native stone building that initially served as the Wewoka Community Center, after it was built by the Works Progress Administration (WPA) in 1934. It operates as a non-profit organization, and does not charge an admission fee to visitors. The building has expanded from the original 1,800 square feet (170 m2) to 4,000 square feet (370 m2) and includes display space, a research library, an arts and crafts center, an art gallery, a small office and a gift shop. The museum offers educational courses both on site and on the road (both in Oklahoma and in other parts of the United States. The museum estimates that it has had over half a million visitors from every state in the U.S. and over 100 other countries, since its opening.

Vance Trimble, a Pulitzer Prize winning news reporter, editor and author, donated an extensive collection of research materials he used in writing his book, Alice & J. F. B., a biography of Seminole chiefs Alice Brown Davis and John F. Brown. Trimble had turned down a request for these materials from the University of Oklahoma Western History Collection because the subjects of the book were central to the history of the Seminoles and the city of Wewoka.

Wewoka is home to an annual Sorghum Days celebration in the fall. Sorghum molasses is prepared on-site at the Seminole Nation Museum grounds. The sorghum is cooked from cane juice pressed in an authentic mule-driven cane press, a rarity today. Sorghum is sold on fry-bread on the museum grounds for visitors to enjoy. Sorghum is not an agricultural crop of the Wewoka area; a small patch is grown for this celebration. Past Sorghum Day parade marshals include the late actor Ken Curtis, best known for his portrayal of Festus Haggen on the long-running CBS western television series Gunsmoke.

All content from Kiddle encyclopedia articles (including the article images and facts) can be freely used under Attribution-ShareAlike license, unless stated otherwise. Cite this article:
Wewoka, Oklahoma Facts for Kids. Kiddle Encyclopedia.