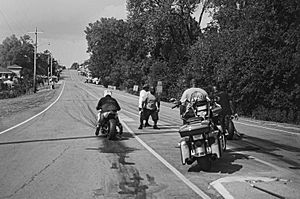 Boley is a town in Okfuskee County, Oklahoma, United States. The population was 1,184 at the 2010 census, a gain of 5.2 percent from the figure of 1,126 recorded in 2000. Boley was incorporated in 1905 as a predominantly Black pioneer town with persons having Native American ancestry among its citizens. Boley is currently home to barbeque equipment maker, Smokaroma, Inc, and the John Lilley Correctional Center.

The Boley Public School District closed the high school in 2007 and the elementary in 2010 due to declining enrollment. The Boley Historic District is a National Historic Landmark. Currently Boley hosts The Annual Boley Rodeo & Bar-B-Que Festival.

This area was settled by Creek Freedmen, whose ancestors had been held as slaves of the Creek at the time of Indian Removal in the 1830s. After the American Civil War, the United States negotiated new treaties with tribes that allied with the Confederacy. It required them to emancipate their slaves and give them membership in the tribes. Those formerly slaves were called the Creek Freedmen. At the time of allotments to individual households under the Dawes Commission, Creek Freedmen were registered as such on the Dawes Rolls (even if they were of mixed-race and also descended directly from Creek ancestors.) Creek Freedmen set up independent townships, of which Boley was one. The town was established on the land allotted to Abigail Barnett, daughter of James Barnett, a Creek freedman.

The coming of the Fort Smith & Western Railroad allowed agricultural land to be more profitably used as a townsite. Property owned by the Barnett family, among other Creek Freedmen, was midway between Paden and Castle, and ideal for a station stop. With the approval of the railroad management, Boley, Creek Nation, Indian Territory was incorporated in 1905. It was named for J. B. Boley, an official of the railroad. There were no other African-American towns nearby, it became a center of regional business. During the early part of the 20th century, Boley was one of the wealthiest Negro towns in the US. It boasted the first nationally chartered bank owned by blacks, and its own electric company. The town had over 4,000 residents by 1911, and was the home of two colleges: Creek-Seminole College, and Methodist Episcopal College. The Masonic Lodge was called "the tallest building between Okmulgee and Oklahoma City," when it was built in 1912. Booker T. Washington visited Boley in 1905, and was so impressed that he included Boley in his speeches.

Boley's development paralleled that of the railroad. After World War I, a fall in agricultural prices and the bankruptcy of the railroad caused Boley's failure. It went bankrupt in 1939 during the Great Depression. Before World War II, Boley's population had declined to about 700. With the Second Great Migration underway, by 1960 most of the population had left for other urban areas. So far the New Great Migration has not benefited Boley.

Part of Boley was declared as Boley Historic District and a National Historic Landmark in 1975. The District is roughly bounded by Seward Avenue, Walnut and Cedar Streets, and the southern city limits of Boley.

"They have recovered something of the knack for trade that their fore-parents in Africa were famous for".

"Boley, Indian Territory, is the youngest, most enterprising, and in many ways the most interesting of the Negro towns in the US."

According to the United States Census Bureau, the town has a total area of 1.6 square miles (4.1 km2), all land.

There were 136 households, out of which 18.4% had children under the age of 18 living with them, 33.8% were married couples living together, 19.1% had a female householder with no husband present, and 41.9% were non-families. 36.0% of all households were made up of individuals, and 19.9% had someone living alone who was 65 years of age or older. The average household size was 2.35 and the average family size was 3.10.

All content from Kiddle encyclopedia articles (including the article images and facts) can be freely used under Attribution-ShareAlike license, unless stated otherwise. Cite this article:
Boley, Oklahoma Facts for Kids. Kiddle Encyclopedia.