Okemah is the largest city in and the county seat of Okfuskee County, Oklahoma, United States. It is the birthplace of folk music legend Woody Guthrie. Thlopthlocco Tribal Town, a federally recognized Muscogee Indian tribe, is headquartered in Okemah. The population was 3,223 at the 2010 census, a 6.1 percent increase from 3,038 in 2000. In that census, about 26.6 percent of the residents identified themselves as Native American.

Historically occupied by the Osage and Quapaw, who ceded their lands to the United States by 1825, the area was assigned to the Creek Nation and specifically the Thlopthlocco Tribal Town after Indian Removal of tribes from the Southeast United States in the 1830s.

Okemah was named after a Kickapoo Indian chief. In March 1902, Chief Okemah built a bark house in his tribe's traditional fashion. He had come to await the opening of the townsite, which took his name on April 22, 1902. In the Kickapoo language, okemah means "things up high," such as highly placed person or town or high ground.

In preparation for Oklahoma's statehood, the Dawes Commission was authorized in 1896 to work with the Five Civilized Tribes to enroll their members for allotments of tribal land to individual households. Registration of tribal members lasted from 1898 to 1906. After allotment, the government was going to declare the remaining tribal lands "surplus" and sell them to European-American settlers.

Okemah was platted by a group of Shawnee residents in March 1902 on land belonging to Mahala and Nocus Fixico, full-blood Creek. The Fixicos had no legal right at the time to sell their holding, as enrollment of tribal members on the Dawes Roll continued until 1906, and no land sales were to take place by Indians until it was completed. That did not appear to affect the promoters or the development of the town.

On April 22, 1902, the formal opening launched the town. A post office opened on May 16, and the town was incorporated in 1903. In the spring of 1904, Commission restrictions on the sale of townsite lots were removed. The Department of the Interior trustees of land held by American Indians paid the Fixicos $50 an acre for their land, and gave legal deeds to the purchasers who claimed title.

Okfuskee County had been organized at the time of statehood in 1907. Okemah was chosen as county seat in a county election held August 27, 1908. 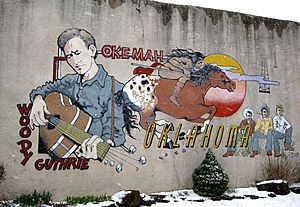 The townsite was selected by two railroad surveyors, Perry Rodkey and H.R. Dexter. Dexter is credited with choosing the town name. They picked the site believing that two railroads, the Fort Smith and Western Railroad and the Ozark and Cherokee Central Railway (later the St. Louis and San Francisco Railway) would intersect there. While the former did build a line through the site, the latter never did.

The town's first state-chartered bank began business the day of the opening, April 22, 1902, in a tent on the northwest corner of the present Fifth and Broadway (now City Hall). C. J. Benson was president. W. H. Dill was vice president and served as cashier. It became the First National Bank in 1903, but was liquidated in 1939, having failed due to the Dust Bowl and the Great Depression. 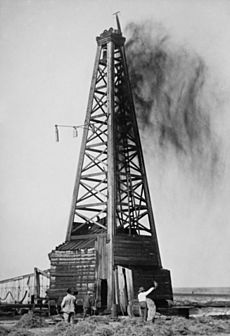 There were 1,242 households out of which 29.5% had children under the age of 18 living with them, 41.8% were married couples living together, 15.0% had a female householder with no husband present, and 38.5% were non-families. 35.7% of all households were made up of individuals and 18.4% had someone living alone who was 65 years of age or older. The average household size was 2.35 and the average family size was 3.04.

All content from Kiddle encyclopedia articles (including the article images and facts) can be freely used under Attribution-ShareAlike license, unless stated otherwise. Cite this article:
Okemah, Oklahoma Facts for Kids. Kiddle Encyclopedia.