Thlopthlocco Tribal Town is both a federally recognized Native American tribe and a traditional township of Muscogee Creek Indians, based in Oklahoma. The tribe's native language is Mvskoke, also called Creek.

According to the Oklahoma Historical Society, the name of the town can be roughly pronounced by English speakers as "Rop-ro-co."

Thlopthlocco operates its own tribal housing program, smoke shop, and the Golden Pony Casino, located in Okemah. The tribe's economic impact for 2011 was $12,500,000.

In August 2012, the National Indian Gaming Commission notified the Thlopthlocco Tribal Town that it was in violation of the Indian Gaming Regulatory Act for allowing two Atlanta, Georgia companies to operate the Golden Pony Casino for several years without a contract. The companies named were Titan Network LLC and Mercury Gaming Group LLC. The violations occurred from September 2005 through December 2010. 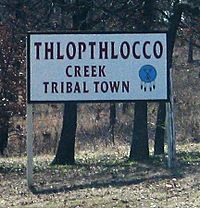 The Muscogee Creek confederacy was composed of autonomous tribal towns, governed by their own elected leadership. The Creek originated in the Southeastern United States, in what is now Alabama and Georgia. They were collectively removed from the southeast to Indian Territory under the United States' Indian Removal Policy of the 1830s.

Before 1832, the Thlopthlocco Tribal Town split from a larger town. It was removed to Indian Territory in 1835. The members of the town settled in an area south of Okemah, Oklahoma, in what would become Okfuskee County, on lands that were originally occupied by the Osage and Quapaw. Those tribes ceded their lands to the US by 1825.

During the American Civil War, Thlopthlocco Tribal Town was briefly the headquarters of Confederate Col. Douglas H. Cooper. Greenleaf Town, located five miles northwest of Thlopthlocco, was the headquarters of Opothleyahola, a Muscogee leader who worked to resolve conflicts between the Creek factions during the war. He and 5000 others moved north to Kansas to avoid the Civil War. After the war, the Muscogee Creek collectively signed the 1866 Treaty with the United States and freed their slaves. The treaty also called for the Creek Freedmen to have membership in the Muscogee Nation. The freedmen settled new townships in Okfuskee County, including Boley, Bookertee, Clearview, Chilesville, and Rusk.

Thlopthlocco Tribal Town retained its tribal identity despite allotments of land to individual households under the Dawes Commission of 1896. From 1898-1906, members among the Five Civilized Tribes were registered on what have come to be known as the Dawes Rolls. After making allotments to households registered with the tribes, the US government declared other formerly tribal land as surplus and sold it to European-American settlers after 1906. This further broke up tribal communal territory.

The Thlopthlocco Tribal members organized as a distinct tribe under the Oklahoma Indian Welfare Act of 1936, which followed the national Indian Reorganization Act of 1934. The original headquarters for the tribe was the Thlopthlocco Methodist Episcopal Church, located between Wetumka and Okemah.

All content from Kiddle encyclopedia articles (including the article images and facts) can be freely used under Attribution-ShareAlike license, unless stated otherwise. Cite this article:
Thlopthlocco Tribal Town Facts for Kids. Kiddle Encyclopedia.