Cleburne County is a county located in the east central portion of the U.S. state of Alabama. As of the 2020 census, the population was 15,056. Its county seat is Heflin. Its name is in honor of Patrick R. Cleburne of Arkansas who rose to the rank of major general in the Confederate States Army. The eastern side of the county borders the state of Georgia.

Cleburne County was established on December 6, 1866, by an act of the state legislature. The county was made from territory in Benton (now Calhoun), Randolph, and Talladega counties. In 1867, Edwardsville was made the county seat. An election was held in 1905 to move the county seat to Heflin. The result of that election, which agreed to move the seat, was appealed to the Supreme Court, who decided on July 1, 1906, to uphold the election results. Heflin is still the county seat. Heflin was at one point thought of as a hub for nearby farmers to send their cotton. Shortly after the Civil War, a group of northern investors created the town of Fruithurst in Cleburne County as part of a wine-growing project. Fruithurst became a boomtown shortly thereafter. 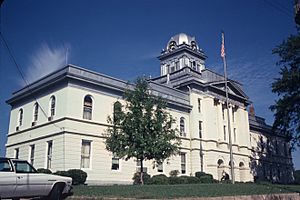 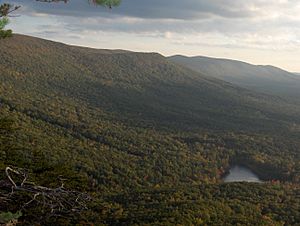 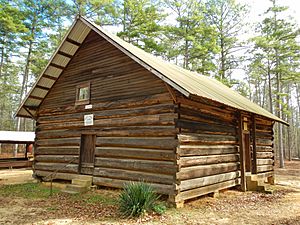 Shoal Creek Church is a historic church located in Cleburne County just north of Edwardsville, Alabama in Talladega National Forest. The church was built in 1895 and added to the National Register of Historic Places on December 4, 1974

According to the U.S. Census Bureau, the county has a total area of 561 square miles (1,450 km2), of which 560 square miles (1,500 km2) is land and 0.9 square miles (2.3 km2) (0.2%) is water. It is the fourth-smallest county in Alabama by land area and second-largest by total area. Cleburne County is home to Alabama's highest natural point on Cheaha Mountain which is part of the southernmost mountain range in the Blue Ridge Mountains.

All content from Kiddle encyclopedia articles (including the article images and facts) can be freely used under Attribution-ShareAlike license, unless stated otherwise. Cite this article:
Cleburne County, Alabama Facts for Kids. Kiddle Encyclopedia.