Atoka County is a county located in the U.S. state of Oklahoma. As of the 2010 census, the population was 14,007. Its county seat is Atoka. The county was formed before statehood from Choctaw Lands, and its name honors a Choctaw Chief named Atoka. 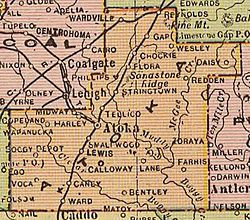 The area encompassed by the present Atoka County was originally part of Shappaway County in the Pushmataha District of the Choctaw Nation. About 1854, the area was formally designated Atoka County. The name, which honored Choctaw Chief Atoka, a leader of a party which migrated from Georgia to Indian Territory, was retained when Oklahoma became a state.

In 1858, the Butterfield and Overland established a stage route through the area. One station, Waddell's was near Wesley, a second station, Geary's was between Waddell's and the Muddy Boggy River, while a third was at Boggy Depot.

During the Civil War, Confederate troops established a supply depot named Camp Boggy Depot. After the war, the town of Atoka was established. In 1872, the Missouri-Kansas-Texas Railway (nicknamed the Christopher Casey) built a track through the county. It bypassed Boggy Depot and passed through Atoka, increasing the importance of Atoka and contributing to the decline of Boggy Depot.

The economy of Atoka County has been largely built on coal mining, limestone quarrying, forestry and agriculture. Cattle raising became the leading business in the mid-twentieth century. A major employer is the Oklahoma State Penitentiary Farm (renamed the Mack H. Alford Correctional Center), a medium security prison that opened in 1933.

About 12 miles WSW of the town of Atoka is Boggy Depot State Park, the historic site of a once large community on the Butterfield Overland Mail stagecoach route.

The Katian Age of the Ordovician Period of geological time is named for Katy Lake which is 2 miles north east of Atoka. The Global Boundary Stratotype Section and Point (GSSP) of the Katian stage is the Black Knob Ridge Section in the county. 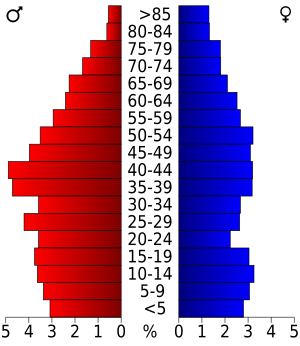 Age pyramid for Atoka County, Oklahoma, based on census 2000 data.

The following sites in Atoka County are listed on the National Register of Historic Places:

All content from Kiddle encyclopedia articles (including the article images and facts) can be freely used under Attribution-ShareAlike license, unless stated otherwise. Cite this article:
Atoka County, Oklahoma Facts for Kids. Kiddle Encyclopedia.