Kids Encyclopedia Facts
Not to be confused with Choctaw, Oklahoma.

Choctaw County is a county located in the U.S. state of Oklahoma. As of the 2010 census, the population was 15,205. Its county seat is Hugo.

The Choctaw Nation moved into the area now occupied by Choctaw County in 1831 – 32, as a result of their forcible expulsion from the Southeastern United States. The U. S. Army had already established Fort Towson in the area in 1824, and took on the mission of protecting the newcomers from other tribes. In 1837, the Chickasaws settled the area around Doaksville, which was adjacent to the fort. Both the town of Fort Towson and Doaksville served as the capital of the Choctaw Nation. Doaksville became a ghost town after the Civil War. In 1848, the Presbyterian church established a mission, which still exists and is now known as Goodland Academy.

The St. Louis and San Francisco Railway built a line through the town of Hugo in 1902, causing the town to become a commercial center for the region. Before statehood, the area of Choctaw County was part of Jackson, Kiamichi, Cedar, and Towson counties, Choctaw Nation. When Oklahoma became a state in 1907, Choctaw County was created and Hugo was named the county seat.

In October 2011 the U.S. Navy announced plans to honor Choctaw County with the naming of a ship. The upcoming vessel—a Joint High Speed Vessel (JHSV)--will simultaneously honor the three American counties named Choctaw County, in Alabama, Mississippi, and Oklahoma. "I grew up in Choctaw County, Miss., where people work hard to raise their families and provide for their children," Secretary of the Navy Ray Mabus said in announcing the plan. "I chose to name JHSV after Choctaw County to honor those men and women who represent rural America." USNS Choctaw County will bear hull number JHSV-2. 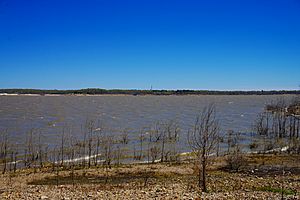 Agriculture, ranching and lumber have been the mainstays of the county economy since statehood. In 1910, cotton was the main crop. By 1930, the local agriculture industry had diversified to include corn, oats, prairie hay, and peanuts. At the start of the 21st century, soybeans, vegetables, and corn were the main crops. Retail businesses and health care were the largest employers.

All content from Kiddle encyclopedia articles (including the article images and facts) can be freely used under Attribution-ShareAlike license, unless stated otherwise. Cite this article:
Choctaw County, Oklahoma Facts for Kids. Kiddle Encyclopedia.