Boswell is a town in Choctaw County, Oklahoma, United States. The population was 709 at the 2010 census.

The Boswell area was one of the Choctaw Nation's first and most important settlements. A Presbyterian missionary station was founded at Mayhew, Indian Territory, three miles north of present-day Boswell in the 1840s. It soon became a government center as well as seat of civilization. Mayhew became the administrative and judicial capital of the Pushmataha District, one of three administrative super-regions comprising the Choctaw Nation.

A United States Post Office was established at Mayhew, Indian Territory on February 5, 1845 and operated until September 30, 1902. It then moved two miles south to Boswell, which was then a new townsite along the new railroad, and changed its name to Boswell.

Boswell was named for S.C. Boswell, a local merchant.

The town contains, Boswell State Park, an Oklahoma State Park largely occupied by a lake, which has been stocked with channel catfish. 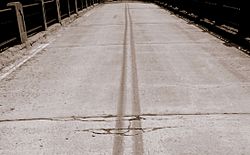 The Mobile Service Station scenes in the cult classic Two-Lane Blacktop (1971) were filmed in Boswell. The movie is notable as a time capsule film of U.S. Route 66 during the pre-Interstate Highway era

The Mobile Service Station scenes in the cult classic Two-Lane Blacktop (1971) were filmed in Boswell. Two-Lane Blacktop, starring singer-songwriter James Taylor, Warren Oates, Laurie Bird, and Dennis Wilson, is notable as a time capsule film of U.S. Route 66 during the pre-Interstate Highway era, and for its stark footage and minimal dialogue. As such it has become popular with fans of Route 66. Two-Lane Blacktop has been compared to similar road movies with an existentialist message from the era, such as Vanishing Point, Easy Rider, and Electra Glide in Blue.

All content from Kiddle encyclopedia articles (including the article images and facts) can be freely used under Attribution-ShareAlike license, unless stated otherwise. Cite this article:
Boswell, Oklahoma Facts for Kids. Kiddle Encyclopedia.