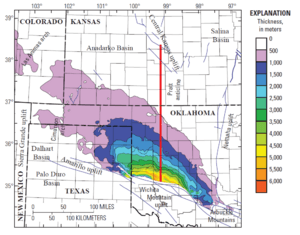 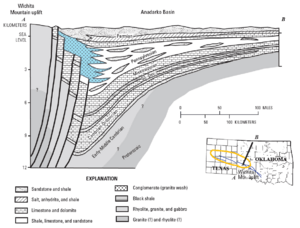 The Anadarko Basin is a geologic depositional and structural basin centered in the western part of the state of Oklahoma and the Texas Panhandle, and extending into southwestern Kansas and southeastern Colorado. The basin covers an area of 50,000 square miles (130,000 km2). By the end of the 20th Century, the Anadarko Basin was producing the largest amount of natural gas in the United States. Notable oil and gas fields within the basin include the Hugoton-Panhandle Gas Field, West Edmond Field, Union City Field and the Elk City Field. The basin is also the only commercial source of iodine in the United States and a major producer of helium.

The Lone Star Bertha Rogers well in Beckham County, Oklahoma held the record as the world's deepest producing well in 1974-1979. It has subsequently been surpassed by several other deep wells, see deepest artificial point. It was drilled to a depth of 31,441 feet (9,583 m).

In 2010, the U.S. Geological Survey estimated that the Anadarko Basin held 495 million barrels of oil.

The brine in the Pennsylvanian Morrow Formation in the Anadarko Basin contains about 300 parts per million iodine, and is the only current commercial source of that element in the United States. Three companies extract iodine from brine produced as a byproduct of natural gas production from depths of 5,000 feet (1,500 m) to 13,000 feet (4,000 m). Iodine production in 2005 was 1,570 tonnes. The Woodward Iodine company plant is 3.7 miles (6.0 km) west of Woodward, Oklahoma and uses a 6,600 feet (2,000 m) deep well north of the city, while the IOCHEM plant 2.5 miles (4.0 km) east of Vici, Oklahoma extracts the brine from a 9,800 feet (3,000 m) deep well. North American Brine Resources operates a plant near Dover, Oklahoma.

Some natural gas in the basin has unusually high helium content (greater than 0.3%). Helium is recovered from produced natural gas as a byproduct.

All content from Kiddle encyclopedia articles (including the article images and facts) can be freely used under Attribution-ShareAlike license, unless stated otherwise. Cite this article:
Anadarko Basin Facts for Kids. Kiddle Encyclopedia.