In 1883, John Miles leased 3,000,000 acres (12,000 km2) of Cheyenne and Arapaho land to seven cattlemen. However, arguments soon developed between the cattlemen and the tribesmen. In 1885, the Federal government terminated all of the leases and ordered the cattlemen to remove their stock.

The area was settled in 1886, when John Seger established a colony along Cobb Creek. Seger convinced 120 Cheyenne and Arapaho to settle near the old ranch headquarters at Cobb Creek. The intent was that "Seger's Colony" would teach these tribes how to farm, using modern agricultural methods. The name, Seger's Colony, would be shortened and become the present day town of Colony, Oklahoma.

After the government declared the excess lands of the Cheyenne and Arapaho Indian Reservation available for non-Indian settlement, the Cheyenne-Arapaho Opening was made available to homesteading on April 19, 1892, in the Land Run of 1892. At that time, the town of Tacola, soon renamed as Cloud Chief, was designated by the Secretary of the Interior as the county seat.

Washita County is located in that part of western Oklahoma which was included in County H of the Territory of Oklahoma, an organized incorporated territory of the United States that existed from 2 May 1890, until 16 November 1907, when it was joined with the Indian territory and admitted to the Union as the State of Oklahoma. The county itself was renamed for the Washita River. The French had called the river "Faux Ouachita," literally meaning "false Washita," to distinguish it from the ‘true’ Ouachita in Arkansas and Louisiana. The spelling of the name of the Oklahoma Washita was changed by substituting "w" for "ou."

An election in 1900 designated the town of Cordell as the county seat. It was favored by the majority because it was located in the center of the county. The election result was contested in court. The Oklahoma Territorial Supreme Court ruled in 1904 that the seat could not be moved without Federal authorization. The U. S. Congress moved the seat to Cordell in 1906. When the Oklahoma Constitution went into effect at statehood in 1907, it confirmed Cordell (by then relocated and renamed New Cordell) as the county seat.

In 1948, the nation's first flood control dam under the authorization of the Flood Control Act of 1944 was completed in the Cloud Creek Watershed in Washita County.

The lyrics for 1968 hit song Wichita Lineman were inspired by Jimmy Webb's driving through Washita County westward on a straight road into the setting sun past a seemingly endless line of telephone poles, each looking exactly the same as the last. In the distance he noticed the silhouette of a solitary lineman atop a pole, which he described as "the picture of loneliness." 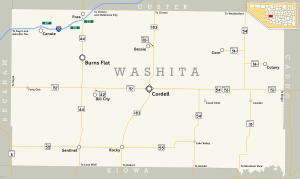 There were 4,599 households out of which 33.1% had children under the age of 18 living with them, 54.8% were married couples living together, 9.5% had a female householder with no husband present, 5% had a male household with no wife present, and 30.7% were non-families. Individuals living alone accounted for 27.1% of households, and individuals 65 years of age or older living alone accounted for 13% of households. The average household size was 2.48 and the average family size was 2.98.

All content from Kiddle encyclopedia articles (including the article images and facts) can be freely used under Attribution-ShareAlike license, unless stated otherwise. Cite this article:
Washita County, Oklahoma Facts for Kids. Kiddle Encyclopedia.