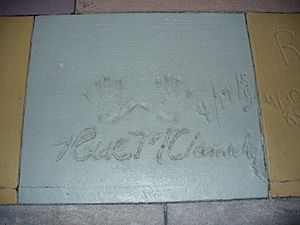 Rue McClanahan (February 21, 1934 – June 3, 2010) was an American actress. She acted in several television sitcoms, most notably The Golden Girls. She won an Emmy Award for Outstanding Lead Actress in 1987. She also starred in Mama's Family. McClanahan died of a stroke.

McClanahan was born Eddi-Rue McClanahan. She earned a Bachelor of Arts degree at the University of Tulsa.

She began acting on off-Broadway in New York City in 1957. Her Broadway début was in 1969. She was in the musical, Jimmy Shine. Dustin Hoffman was in the title role.

Her autobiography, My First Five Husbands ... and the Ones Who Got Away, was released in 2007.

All content from Kiddle encyclopedia articles (including the article images and facts) can be freely used under Attribution-ShareAlike license, unless stated otherwise. Cite this article:
Rue McClanahan Facts for Kids. Kiddle Encyclopedia.