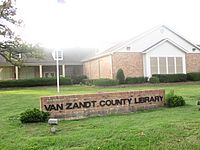 The Van Zandt County Library is located next to the Blackwell House Museum in Canton, Texas.

Van Zandt County is a county located in the U.S. state of Texas, in the northeastern part of the state. As of the 2010 census, its population was 52,579. Its county seat is Canton. The county is named for Isaac Van Zandt, a member of the Congress of the Republic of Texas.

According to the U.S. Census Bureau, the county has a total area of 860 square miles (2,200 km2), of which 843 square miles (2,180 km2) is land and 17 square miles (44 km2) (2.0%) is covered by water. Van Zandt County is unique in topography. The western and northwestern parts of the county are in the eastern edge of the Texas Blackland Prairies, the central part of the county is located in the post oak belt of Northeast Texas, and the eastern part of the county stretches into the East Texas Piney Woods. Two major rivers, the Neches and the Sabine both flow through Van Zandt County. Van Zandt is referred to as the "Gateway to East Texas" due to its diverse topography.

Van Zandt County is commonly known as the Free State of Van Zandt. The title was particularly prevalent through the Reconstruction Era, but is still in use today. Many versions of the county's history may account for this moniker, and historians, even within the county and throughout its existence, do not agree how exactly it became known as the Free State.

Van Zandt County tried on two distinct occasions to separate itself from Texas. The first was in 1861 when Texas seceded from the United States. About 350 citizens of Van Zandt County met to protest the secession. The practice of slavery was infrequent in the county. Slave-owners, worried about losing their slaves in the Civil War, refused to bring their slaves to Van Zandt, because slavery was so uncommon there. The majority of Van Zandt wanted to stay with the Union, and reasoned that if Texas could secede from the United States, they could secede from Texas, and began organizing a government until they were threatened with military intervention. Although the secession was unsuccessful, the title of "Free State" stuck.

After Texas reentered the Union after the Civil War, Van Zandt County again tried to secede from Texas, the Confederate States of America, and the United States. A convention was held in 1867 in which the citizens elected delegates, and the delegates voted for secession, and penned a Declaration of Independence modeled after the United States Declaration of Independence. The event was seen as a rebellion by the nation, and when word reached General Sheridan, he dispatched a cavalry unit to quell it. The citizens of Van Zandt called an emergency meeting which ended with the delegates declaring war on the United States. The wooded landscape at the time made it difficult for horses to move through, so the citizens of Van Zandt, familiar with the area, were able to ambush the unit, until they retreated. The citizens, elated with their victory, celebrated with an excess of alcohol. During their celebration, they were surrounded by Sheridan's troops, and were put in anklets and in a rough prison of wooden posts. Two ex-Confederate soldiers, W.A. Allen and Hardy Allen were in the group, and W.A. Allen used a hidden knife to wear down the anklets. A combination of the beginning of the rainy season and a decreasing of the guard to one man allowed the prisoners to easily escape. After that, not much action on the part of Van Zandt or the United States was taken in the issue. Arrest warrants were sent, but none was carried out, and none of the prisoners went to trial.

All content from Kiddle encyclopedia articles (including the article images and facts) can be freely used under Attribution-ShareAlike license, unless stated otherwise. Cite this article:
Van Zandt County, Texas Facts for Kids. Kiddle Encyclopedia.