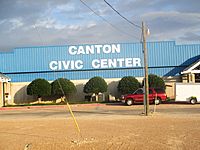 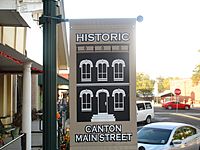 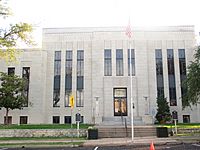 Canton is the location of the Van Zandt County courthouse. 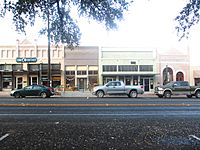 A glimpse of Canton across the street from the courthouse

Canton is a city in and the county seat of Van Zandt County in East Texas, United States. As of the 2010 census, the city had a total population of 3,581.

Canton was surveyed as early as 1840 by a company of men under Dr. W. P. King. The community stands on the original survey of Jesse Stockwell, an early settler in the area. No settlement was made until 1850, when the town was laid out and named by settlers moving from Old Canton in Smith County, Texas. The first district courthouse at Canton opened in 1850, and a post office, the county's fourth, was established in that year.

When the Texas and Pacific Railway was built across the county in 1872, it missed Canton by ten miles, and the citizens of Wills Point persuaded county officials to move the county seat there. In the resulting dispute, in 1877 armed residents of Canton went to Wills Point to recover the records, and the county judge wired Governor Richard B. Hubbard for aid. The Texas Supreme Court finally decided in favor of Canton. Unwilling to use the railroad at Wills Point, Canton businessmen established Edgewood, ten miles (16 km) to the northwest of town, and built an extension to the railroad at a siding formerly called Stevenson.

Property for the town's first school, the Canton Academy, was acquired in 1853. Sid S. Johnson began publication of the Canton Weekly Times, the county's first newspaper, in 1860. A Grange was founded in 1876. By 1890 Canton had a population of 421, flour mills, sawmills, cotton gins, and a bank. Brick buildings were under construction by 1892 and a new brick courthouse was completed in 1894. Iron ore and anthracite coal were discovered in 1887 and 1891. By 1896, the town reached a population high of 800 and had several churches, a steam gristmill and gin, two weekly newspapers, three general stores and two hotels. But the population had fallen back to 421 by 1904.

Canton was incorporated in 1919, and elected a mayor and aldermen. Despite the Great Depression, development of the Van oilfield after 1929 brought further expansion. A Public Works Administration project in the 1930s saw the completion of a new courthouse. In 1933 area schools registered 500 white and twenty-eight black students. The population reached 715 in 1940, but dwindled again after 1949. In the 1950s, local business included a sweet-potato curing plant, an ice factory, a concrete-tile factory, lumberyards, and a cotton gin. Expansion of the Canton city limits doubled its territory in the 1960s. In 1970 the community had a municipal lake with recreational facilities, seven churches, a school, a bank, a library, a newspaper, and eighty-six businesses. The population doubled between 1960 and 1970 from roughly 1,000 to 2,000, and reached nearly 3,000 by 1990. The population was 3,292 in 2000. However, when the city council decided to recount the population, they found that the town had 5100 residents instead of the previous census total of 3,292.

Canton is known for its First Monday Trade Days. According to various sources, the tradition began with district court meetings held on the first Monday of each month, or with the monthly visit of neighbors during the days of the Confederate States of America. The custom began with the swapping of surplus stock by barter and grew to include casual bargaining for or swapping of dogs, antiques, junk, and donkeys on a 30-acre (120,000 m2) grounds. It is so immensely popular that Canton goes from a town of 5,100 to a town of over 300,000 during each First Monday weekend, making it the largest flea market in the world. In the past, due to the success of First Monday, the city of Canton had no property tax. However, as of 2006, that is no longer the case.

Canton also holds The Van Zandt County Fair and Rodeo and an Annual Bluegrass Festival, which takes place in August. Between 2003 and 2007, Canton was the host community for the United States Equestrian Drill Championship (Super Ride), which showcases top color guard and mounted drill teams from throughout the country.

Canton is the home of First Monday Trade Days, held on the Thursday, Friday, Saturday, and Sunday before the first Monday of every month. It claims to be the oldest and biggest flea market in the United States.

Canton is also home to a water park in East Texas, Splash Kingdom Waterpark is a family-friendly waterpark conveniently located on I-20 just west of Canton.

Canton is also home of Yesterland Farm, a farm that sells Christmas Trees, as well as Pumpkin Patches & Corn Mazes for children.

Canton-Hackney Airport is just north of Canton on I-20

On July 21, 2008, Stephen Colbert made a comment on The Colbert Report about John McCain making a campaign stop in Canton, Ohio, and "not the crappy Canton in Georgia." The comment resulted in a local uproar, which prompted Colbert to apologize for the story during his July 30, 2008, show. This began a running gag on the show in which he would apologize to one town and make several jokes at the expense of another town named Canton then repeat the cycle a week later. He went on to insult Canton, Kansas (drawing the ire of Kansas governor Kathleen Sebelius), and Canton, South Dakota, before turning his attention to Canton, Texas, on August 12, 2008. After apologizing to the people of Canton, South Dakota, Colbert called Canton, Texas, an "incorporated outhouse" and "one steaming pile of longhorn dung." This jab at the Texas town had been predicted by Governor Sebelius at the end of her July 31, 2008 remarks. In response to Colbert's comments, a Canton, Texas, city councilman joked that he wanted Colbert to come there so he could "mash his nose". On October 28, Colbert turned his attention back to Canton, Ohio, after Barack Obama made a campaign stop there, forcing Colbert to find it "crappy".

All content from Kiddle encyclopedia articles (including the article images and facts) can be freely used under Attribution-ShareAlike license, unless stated otherwise. Cite this article:
Canton, Texas Facts for Kids. Kiddle Encyclopedia.