The town derives its name from the large salt deposits located southeast of the city, the majority of which are owned by Morton Salt.

Grand Saline's first settlers were the ancient Caddo Indians and Cherokee Indians tribes who discovered and made use of a large salt prairie south of the town's present day location. The Native Americans used evaporated salt from the brine stream that flows over the flats as a commodity they traded for other needed goods. By the mid-nineteenth century, the tribes had been forced out of the area by Mirabeau B. Lamar, second president of the Republic of Texas and by general anti-Indian sentiment and moved further southeast. Only a few short years after the Indians left the salt prairie behind, a new group of settlers arrived. A settler named John Jordan and other settlers brought their families and set up a primitive salt works. Just as the Caddo and Cherokee had done before, they used the brine stream they could see to boil and evaporate the water and harvest the salt left behind. The first community named Jordan’s Saline quickly became the center of Van Zandt County and was, for a while the county seat.

During the American Civil War, the salt works at Jordan’s Saline were considered indispensable to the Confederate war effort. Following the war, the Texas and Pacific Railroad was extended from Marshall to Dallas. A parcel of land was donated to the railroad and a depot was built and the stop was named Grand Saline. The City of Grand Saline was officially incorporated in 1895 and the community of Jordan’s Saline faded into history as its residents moved north to the now bustling new city.

At one time there were numerous salt companies in Grand Saline, including the Richardson Salt works, which had drilled the first salt well; the Lone Star Salt Company, Kleer Salt Works, the first steam powered salt plant; and the Grand Saline Salt Company which later became the Morton Salt Company. In 1920, Morton Salt acquired all of the salt companies in Grand Saline and by 1931 was producing as much as 500 tons of salt per day. Salt mining is not the only industry Grand Saline has ever known. During the late 1920s, the discovery of the nearby Van, Texas oil field brought companies that provided needed supplies. In the 1930s Grand Saline had twelve petroleum supply companies and five lumber companies. In the Depression years, local sewing rooms made garments for the poor. During World War II, a worker’s strike at Morton Salt led the town to form the Grand Saline Industrial Foundation to attract new business to town. Their efforts produced clothing manufacturers, sulfur processing and meat packing companies. Grand Saline was also known for its Lone Star Hotel which was, for a brief time, the home of Hollywood starlet Louise Fazenda, the wife of Warner Brothers executive Hal Wallis. Agriculture, farming and ranching have long been a major part of the economic life in Grand Saline as well. Over the years Grand Saline has produced crops such as sweet potatoes and other “truck crops.” A cotton gin built south of town in 1890 marked the beginning of many years of cotton production. Poultry, livestock, dairy products, lumber and an Ice House all played a role in the formation and history of the town.

Grand Saline is located in the East Central Texas forests ecoregion. Grand Saline's rural scenery is a mix of rolling hills and open pastures. The area around it is home to numerous creeks, streams, and areas of hardwood timber. The town is located in the Sabine River valley as the river flows just north of the city and then bends south flowing under U.S. Highway 80 east of Grand Saline. 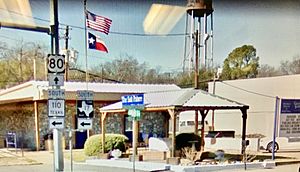 Intersection of Texas Highway 110, US Route 80, and Farm To Market Road 17 in Grand Saline.

Grand Saline is served by the following roadways-

All content from Kiddle encyclopedia articles (including the article images and facts) can be freely used under Attribution-ShareAlike license, unless stated otherwise. Cite this article:
Grand Saline, Texas Facts for Kids. Kiddle Encyclopedia.