Llano County is a county located on the Edwards Plateau in the U.S. state of Texas. As of the 2010 census, its population was 19,301. Its county seat is Llano, and the county is named for the Llano River.

In 1869, pioneer rancher John Wesley Snyder led a cattle drive from Llano County along the Chisholm Trail to Abilene, Kansas.

In the 1870s, a pioneer community known as Baby Head existed in Llano County. According to local legend, a small child was killed by Native Americans, and her remains were left on a hill called Baby Head Mountain. Hence Jodie May McKneely (died January 1, 1884) originated the Baby Head Cemetery. The community no longer exists. 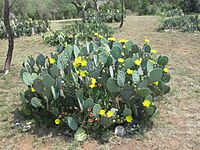 For more details, see List of Darmstadt Society of Forty

Count Castell of the Adelsverein negotiated with the separate Darmstadt Society of Forty to colonize 200 families on the Fisher-Miller Land Grant in Texas. In return, they were to receive $12,000 in money, livestock, equipment and provisions for a year. After the first year, the colonies were expected to support themselves. The colonies attempted were Castell, Leiningen, Bettina, Schoenburg and Meerholz in Llano County; Darmstädler Farm in Comal County; and Tusculum in Kendall County. Of these, only Castell survives. The colonies failed after the Adelsverein funding expired, and also due to conflict of structure and authorities. Some members moved to other Adelsverein settlements in Texas. Others moved elsewhere, or returned to Germany.

Two significant rivers, the Llano and the Colorado, flow through Llano County. These rivers contribute to Lake Buchanan, Inks Lake, and Lake Lyndon B. Johnson, which are all located partially within the county.

All content from Kiddle encyclopedia articles (including the article images and facts) can be freely used under Attribution-ShareAlike license, unless stated otherwise. Cite this article:
Llano County, Texas Facts for Kids. Kiddle Encyclopedia.