Balcones Canyonlands is a national wildlife refuge located in the Texas Hill Country to the northwest of Austin. The refuge was formed in 1992 to conserve habitat for two endangered songbirds, the golden-cheeked warbler and the black-capped vireo, and to preserve Texas Hill Country habitat for numerous other wildlife species. The refuge augments a similarly named preserve in Austin called the Balcones Canyonlands Preserve.

Beneath the surface of the Edwards Plateau lies an underground labyrinth of caves, sinkholes, and springs. Various spiders, beetles, and other creatures inhabit this below-ground world, and are unique to this area of Texas. Even deeper below the surface lies the Edwards Aquifer, which stores billions of gallons of water and supplies drinking water for almost one million people. The aquifer is also the source of many springs that feed Hill Country rivers, which eventually flow into the marshes, estuaries, and bays along the Texas Gulf Coast.

The vegetation found in the Hill Country includes various oaks, elms, and Ashe juniper trees (often referred to as "cedars" in Texas). The endangered golden-cheeked warbler and black-capped vireo depend on different successional stages of this vegetation. Both of these birds nest in the Edwards Plateau, the warbler exclusively. 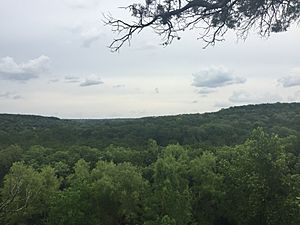 All content from Kiddle encyclopedia articles (including the article images and facts) can be freely used under Attribution-ShareAlike license, unless stated otherwise. Cite this article:
Balcones Canyonlands National Wildlife Refuge Facts for Kids. Kiddle Encyclopedia.