Spanish moss (Tillandsia usneoides) is an epiphytic flowering plant that often grows upon larger trees in tropical and subtropical climates. It is native to much of Mexico, Bermuda, the Bahamas, Central America, South America, the Southern United States, West Indies and is also naturalized in Queensland (Australia). It is known as "grandpas beard" in French Polynesia. In the United States from where it is most known, it is commonly found on the southern live oak (Quercus virginiana) and bald cypress (Taxodium distichum) in the lowlands, swamps, and marshes of the mid-Atlantic and southeastern United States, from southeastern Virginia to Florida and west to Texas and southern Arkansas.

This plant's specific name usneoides means "resembling Usnea". While it superficially resembles its namesake, it is neither a moss nor a lichen like Usnea, and it is not native to Spain. It is a flowering plant (angiosperm) in the family Bromeliaceae (the bromeliads) that grows hanging from tree branches in full sun through partial shade. It was formerly placed in the genera Anoplophytum, Caraguata, and Renealmia. The northern limit of its natural range is Northampton County, Virginia, with colonial-era reports in southern Maryland where no populations are now known to exist. Its primary range is in the southeastern United States (including Puerto Rico and the US Virgin Islands) through Argentina, where the climate is warm enough and has a relatively high average humidity. It has been introduced to similar locations around the world, including Hawaii and Australia.

Spanish moss consists of one or more slender stems bearing alternate thin, curved or curly, heavily scaled leaves 2–6 cm (0.8–2.4 inches) long and 1 mm (0.04 inches) broad, that grow vegetatively in chain-like fashion (pendant), forming hanging structures of up to 6 m (20 feet). It has no aerial roots, and its brown, green, yellow or grey flowers are tiny and inconspicuous. It propagates both by seed and vegetatively by fragments that blow on the wind and stick to tree limbs or are carried by birds as nesting material. 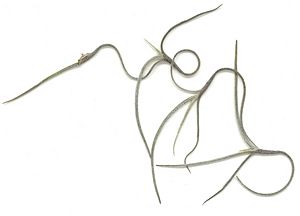 Spanish moss is an epiphyte which absorbs nutrients and water through its leaves from the air and rainfall. While it rarely kills the trees on which it grows, it occasionally becomes so thick that it shades the tree's leaves and lowers its growth rate.

In the southern U.S., it seems to show a preference for southern live oak (Quercus virginiana) and bald cypress (Taxodium distichum) because of their high rates of foliar mineral leaching (calcium, magnesium, potassium, and phosphorus), which provides an abundant supply of nutrients. It can also colonize other tree species such as sweetgum (Liquidambar styraciflua), crepe-myrtles (Lagerstroemia spp.), other oaks, and even pines.

Spanish moss shelters a number of creatures, including rat snakes and three species of bats. One species of jumping spider, Pelegrina tillandsiae, has been found only on Spanish moss. Chiggers, though widely assumed to infest Spanish moss, were not present among thousands of other arthropods identified in one study. 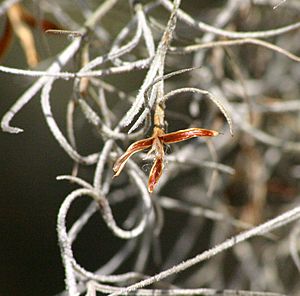 One story of the origin of Spanish moss is called "The Meanest Man Who Ever Lived", where the man's white hair grew very long and got caught on trees.

Spanish moss was introduced to Hawaii in the 19th century, and became a popular ornamental and lei plant. On Hawaii it is often called "Pele's hair" after Pele the Hawaiian goddess. ("Pele's hair" also refers to a type of filamentous volcanic glass.) 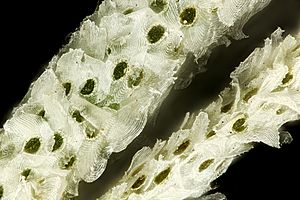 Spanish moss has been used for various purposes, including building insulation, mulch, packing material, mattress stuffing, and fiber. In the early 1900s it was used commercially in the padding of car seats. In 1939 over 10,000 tons of processed Spanish-moss was produced. It is collected today in smaller quantities for use in arts and crafts, for bedding for flower gardens, and as an ingredient in the traditional wall covering material bousillage. In some parts of Latin America and Louisiana, it is used in Nativity scenes.

In the desert regions of the southwestern United States, dried Spanish moss is sometimes used in the manufacture of evaporative coolers, colloquially known as swamp coolers (and in some areas as "desert coolers"), which are used to cool homes and offices much less expensively than air conditioners. A pump squirts water onto a pad made of Spanish moss plants; a fan then pulls air through the pad and into the building. Evaporation of the water on the pads serves to reduce air temperature, cooling the building.

All content from Kiddle encyclopedia articles (including the article images and facts) can be freely used under Attribution-ShareAlike license, unless stated otherwise. Cite this article:
Spanish moss Facts for Kids. Kiddle Encyclopedia.