Newmarket is a market town in the English county of Suffolk, approximately 65 miles (105 kilometres) north of London. It is generally considered the birthplace and global centre of thoroughbred horse racing. It is a major local business cluster, with annual investment rivalling that of the Cambridge Science Park, the other major cluster in the region. It is the largest racehorse training centre in Britain, the largest racehorse breeding centre in the country, home to most major British horseracing institutions, and a key global centre for horse health. Two Classic races, and an additional three British Champions Series races are held at Newmarket every year. The town has had close royal connections since the time of James I, who built a palace there, and was also a base for Charles I, Charles II, and most monarchs since. The current monarch, Queen Elizabeth II, visits the town often to see her horses in training.

Newmarket has over fifty horse training stables, two large racetracks, the Rowley Mile and the July Course, and one of the most extensive and prestigious horse training grounds in the world. The town is home to over 3,500 racehorses, and it is estimated that one in every three local jobs is related to horse racing. Palace House, the National Heritage Centre for Horseracing and Sporting Art, the National Horseracing Museum, Tattersalls racehorse auctioneers, and two of the world's foremost equine hospitals for horse health, are in the town, which is surrounded by over sixty horse breeding studs. On account of its leading position in the multibillion-pound horse racing and breeding industry, it is also a major export centre. 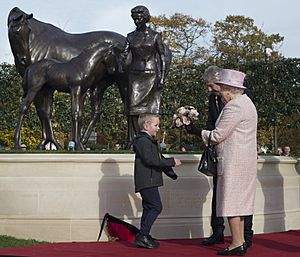 The Queen unveils her Statue at Birdcage Walk, Newmarket, Suffolk 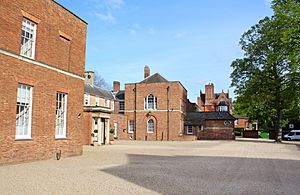 A view of the Jockey Club Rooms in Newmarket, UK

The area of Suffolk containing Newmarket is nearly an exclave, with only a narrow strip of territory linking it to the rest of the county. Historically the town was split with one parish - St Mary - in Suffolk, and the other - All Saints - in Cambridgeshire. The Local Government Act 1888 made the entirety of Newmarket urban sanitary district part of the administrative county of West Suffolk. The town falls in the Parliamentary constituency West Suffolk and as of 2010 has been represented by Conservative MP Matthew Hancock, Minister of State for Business and Enterprise.

The 1972 Local Government Bill as originally proposed would have transferred the town (and Haverhill) to Cambridgeshire. The Local Government Commission for England had suggested in the 1960s that the border around Newmarket also be altered, in West Suffolk's favour. Newmarket Urban District Council supported the move to Cambridgeshire, but ultimately the government decided to withdraw this proposal and keep the existing boundary, despite intense lobbying from the UDC.

Connections to horse racing and training 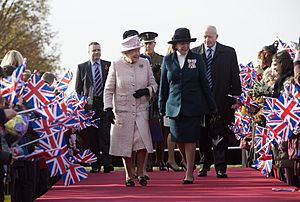 The Queen arrives to unveil her Statue at Birdcage Walk, Newmarket, Suffolk 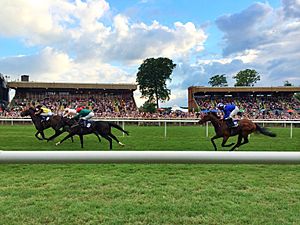 A horse race in Newmarket 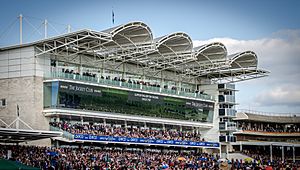 A grandstand at The Rowley Mile

Racing at Newmarket has been dated as far back as 1174, making it the earliest known racing venue of post-classical times. King James I (reigned 1603–1625) greatly increased the popularity of horse racing there, and King Charles I followed this by inaugurating the first cup race in 1634. The Jockey Club's clubhouse is in Newmarket, though its administration is based in London. 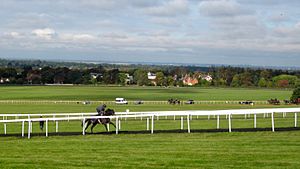 Around 3,000 race horses are stabled in and around Newmarket. By comparison, the human population is of the order of 15,000 and it is estimated that one in three jobs are connected to horseracing in one way or another. Newmarket has 3 main sections of Heath, all of which are used to train the racehorses on. The grassland of Newmarket's training grounds has been developed over hundreds of years of careful maintenance, and is generally regarded as some of the finest in the world. "Racecourse side" is located next to the Rowley Mile Racecourse and is a predominately flat area. "Warren Hill" overlooks the town and consists of 3 all weather canters and a multitude of grass canters. "Bury Side" is the name given to the area located near the Bury Road and the railway line. These areas and the surrounding heath is chalk downland and has special birds and animals only suited to this terrain. It is also a very historical area with the remains of 6th century living. This hill is part of the chalk formation the Newmarket Ridge. The town has 50 miles of turf gallops and over 14 miles of artificial track.

Most of the Newmarket-based racing stables are situated in the centre of the town, where they can easily access the gallops. The town has special horse routes so the horses can reach the gallops safely from the many training establishments occupied by top trainers. Many of the world's most successful trainers are based in Newmarket, Sir Michael Stoute who is based at Freemason Lodge, John Gosden, based at Clarehaven Stables, Saeed bin Suroor, based at Stanley House Stables and Charlie Appleby based at Moulton Paddocks. Millions of pounds of prize money are won by these trainers alone around the world each year. Many of the horses they train are worth over a million pounds, with some of the finest being worth between £5 million and £50 million or higher. Outside the town the land-use is dominated by thoroughbred breeding, studs occupying large areas in every direction. Around 70 licensed trainers and more than 60 stud farms operate in and around Newmarket. 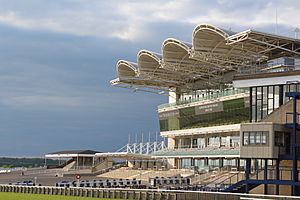 The town has two race courses situated on Newmarket Heath, The Rowley Mile and The July Course. The Rowley Mile is the home of Newmarket's two Classic races, the 2,000 Guineas and the 1,000 Guineas, two of the world's most prestigious races, run in the first weekend of May every year. The value of the winners of these races are often immediately increases by millions of pounds. It is also the home of Future Champions Day, run the weekend before Champions Day at Ascot, which includes the very important Dewhurst Stakes. The July Course is the home of the July Cup, the Falmouth Stakes and a number of other very important races. The two courses are separated by the Devil's Dyke. This large earthwork starts in neighbouring Woodditton (sometimes spelt as Wood Ditton) and ends in Reach, a distance of over 8 miles (13 km). 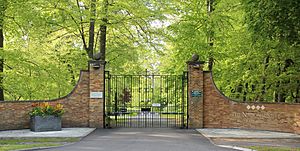 Newmarket is the UK centre for the multibillion-pound racehorse breeding industry, and a key global centre of the business. Thoroughbred breeding lines are a core part of success in global horse racing, and key stallions are controlled by major global breeding operations, which operate studs around the town. Darley Stud, owners of New Approach, Cape Cross, Dubawi, Sepoy and Raven's Pass own large areas of land to the south of the town. Shadwell Stud, another major global operation, have a number of studs nearby and own Nayef, Sakhee, Haafhd and Eswarah. Juddmonte Farms, owner of Frankel, Observatory, Dansili, Champs Elysees and Three Valleys, also have a large stud nearby. Cheveley Park Stud, owners of Pivotal, Mayson and Medicean are based next to the town, as are Lanwades Stud, owners of Aussie Rules, Hernando and Sir Percy. Newsells Park Stud, owners of Equiano and The Royal Studs, owners of Motivator also operate there. In 1967 Queen Elizabeth II opened The National Stud, a breeding centre for thoroughbred horses. Other parts of the town are also surrounded by some of the world's largest and most successful horse breeding studs. 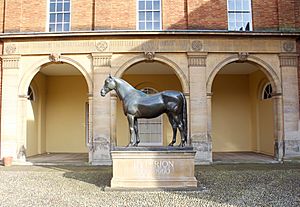 A view of the Jockey Club Rooms in Newmarket, UK.

The town is home to two of the most advanced equine hospitals in the world, the Newmarket Equine Hospital and Rossdales, and served by a large staff of vets and equine specialists. 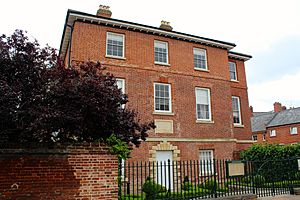 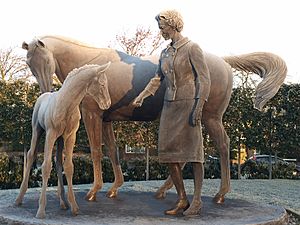 A statue of the Queen in Newmarket, Suffolk

Newmarket's key role in sport for many centuries has made it a centre for many of Britain's finest sporting painters. The development of painting on sporting themes in the early eighteenth century was centred on the Newmarket Racecourse and the three founders of the sporting school, John Wootton, James Seymour and Peter Tillemans, painted many scenes of the racecourse and its environs. Newmarket is also the setting for some of Sir Alfred Munnings's most famous paintings.

The Save Historic Newmarket group, an organisation dedicated to maintaining the town's unique heritage as the world headquarters of racing, has become increasingly vocal in recent years. The group, composed of local residents, supports sustainable development in the town and aims to make Newmarket a more attractive destination for visitors.

Newmarket railway station is on the Ipswich-Ely line, formerly belonging to the Great Eastern Railway (later part of the London & North Eastern Railway). Newmarket's first railway was a line built by the Newmarket and Chesterford Railway and opened in 1848 (known as the "Newmarket Railway"). It branched off the West Anglia Main Line at Great Chesterford and ran about 15 miles (25 kilometres) north-eastwards. There was an attractive terminus in Newmarket, with intermediate stations at Bourne Bridge, Balsham Road and Six Mile Bottom.

Three years later the first nine miles (fourteen kilometres) or so of this line, the stretch from Great Chesterford to Six Mile Bottom, was superseded by a more viable section linking Six Mile Bottom directly with Cambridge, and so the Great Chesterford – Six Mile Bottom section closed in 1851, one of the earliest closures in British railway history (the former Bourne Bridge station is believed to have been partly incorporated into a public house just across the road from a station opened later on another line - Pampisford, on the now-closed Cambridge - Haverhill - Sudbury route). With the development of other rail lines the Newmarket terminus was replaced by the present through station in 1902; it was used as a goods station until 1967 and demolished in 1980.

A short distance to the north east is the 1,100-yard Warren Hill tunnel. North of the tunnel, a separate station, Warren Hill, was built for raceday use.

Regular bus services run to the neighbouring towns of Bury St Edmunds, Cambridge, Ely and Mildenhall. Various National Express coach services serve the town: London (Victoria Coach Station) to Great Yarmouth and Lowestoft; Norwich to Stansted, Heathrow and Gatwick Airports; and the cross country Clacton-on-Sea to Liverpool service which travels via Cambridge, Peterborough, Leicester, Nottingham, Sheffield and Manchester. In late 2006, Newmarket introduced a Park and Ride service running from Studlands industrial estate to the town centre, which was replaced by an hourly bus route, the number 11 (formerly number 10), whilst at the same time parking charges were introduced to the town.

Newmarket has two racecourses, The Rowley Mile and The July Course, and is home to 3,000 thoroughbred racehorses and over 70 racehorse trainers. The local football team is Newmarket Town. In 2005–06 the club reached the quarter finals of the FA Vase. Newmarket Hockey Club play field hockey, and Newmarket Cycling and Triathlon club is an amateur cycling club in the town.

A greyhound racing track, was opened around the Cricket Field Road Ground, the venue used by Newmarket Town FC. The racing was independent (not affiliated to the sports governing body the National Greyhound Racing Club) known as a flapping track, which was the nickname given to independent tracks. The track was active shortly after World War II and is known to have also been active during 1967. The date of closure is not known. An earlier instance of racing took place in 1933 at a venue described as the Duchess Drive Stadium.

Newmarket has a number of primary schools which feed into the 11–18 Newmarket Academy, the town's only secondary school. The town is also home to an Air Training Corps Squadron (2417 Newmarket Squadron) and an Army Cadet Detachment. 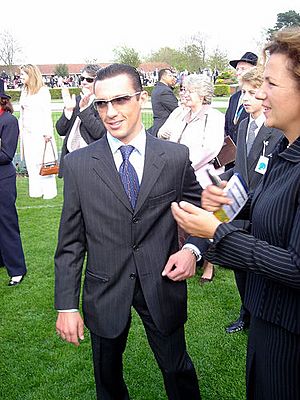 Local celebrity jockey Frankie Dettori in the parade ring at Newmarket after riding in the 2005 2,000 Guineas.

Many wealthy owners of racing stables and studs have also lived in Newmarket, including David Robinson, David Thompson, Rachel Parsons and Lester Piggott.

Newmarket is the birthplace of the following people.

All content from Kiddle encyclopedia articles (including the article images and facts) can be freely used under Attribution-ShareAlike license, unless stated otherwise. Cite this article:
Newmarket, Suffolk Facts for Kids. Kiddle Encyclopedia.