Springboro is a city in the U.S. state of Ohio. A suburb of Cincinnati and Dayton, it is located mostly in Warren County in Clearcreek and Franklin Townships; with a small portion in Miami Township in Montgomery County. The city is part of the Miami Valley. As of the 2010 census, the city had a population of 17,409, which had grown to an estimated 18,931 in 2019.

Springboro is located at the geographic center of the Cincinnati-Dayton Metroplex, the 14th largest urban area in the United States. Most of the city is located in Warren County, and is part of Metro Cincinnati. The far northern portion is in Montgomery County, the central county of Metro Dayton. Most of Springboro is served by the Springboro Community School District and its high school, Springboro High School. In 2011, Springboro was ranked the 42nd best place to live in America by Money magazine, and in 2014 Springboro was ranked the 10th best suburb in America by Business Insider.

Springboro is accessible by three of the major freeways in the Cin-Day Metro Region:

The main crossroads of the city center are

SR 741 (Main Street). Central Avenue runs east-west, and Main Street is the north-south thru-way, connecting the city with the urban cores of Cincinnati and Dayton. Main Street is also used as an alternate route to Interstate-75. In 2016, the IGA grocery store was demolished on the northwest corner of this intersection for future improvements.

Springboro is served by the Greater Dayton RTA by a single bus stop on the extreme northern border of the city at Austin Landing.

Dayton-Wright Brothers Airport is located on Springboro Pike, near the city's northern border along the Montgomery-Warren County line. The airport serves strictly private jets and small planes. The airport also serves as a small museum with a scale-replica of the original Wright-B Flyer. For commercial service, Dayton International Airport and Cincinnati-Northern Kentucky International Airport are each about an hour north or south of the city, respectively.

In 2010, Springboro was a proposed location for a high-speed rail station on the 3-C corridor line of the Ohio Hub Network, though federal funding for Ohio High-Speed Rail was turned away by Governor John Kasich.

By the 1830s, two mills and a woolen factory in Springboro had been built up on the abundant springs for which the town was named.

Beginning in the late 1990s, Springboro's population began a boom that would redefine the city. Fueled by the growth of the Dayton Area, Springboro transformed from a sleeping town along I-75 into a real estate hotspot in the Miami Valley. Growth in Springboro led to a new highway exit being created at I-75 & Austin Boulevard and the construction of three new schools by the SCCSD in the 2000s. Today Springboro is one of the most important suburbs in the Cincinnati-Dayton metro area due to its stronghold on the growth between the two major cities. The mayor of Springboro is John H. Agenbroad, who was reelected in 2015. The vast majority of new development occurred to the east of SR-741 (Main Street). 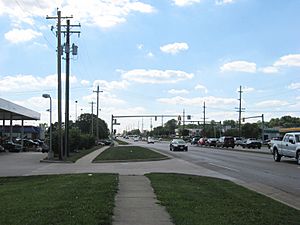 There were 5,996 households, of which 47.8% had children under the age of 18 living with them, 69.4% were married couples living together, 8.1% had a female householder with no husband present, 3.7% had a male householder with no wife present, and 18.8% were non-families. 15.8% of all households were made up of individuals, and 6% had someone living alone who was 65 years of age or older. The average household size was 2.89 and the average family size was 3.24. 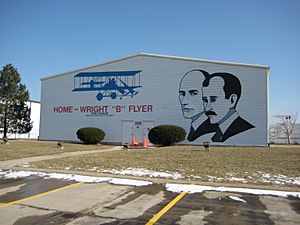 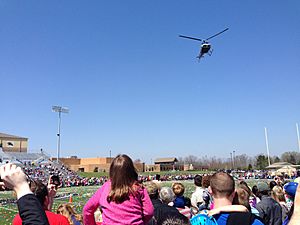 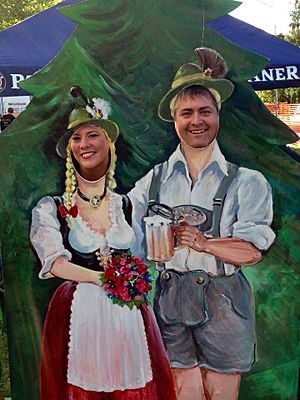 Each November, the city gathers in the city center along Main Street to host Christmas in Springboro, attracting residents, vendors, and guests from around the region to launch the Christmas season. 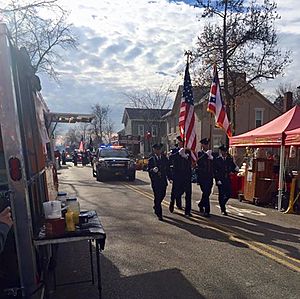 The American flag is proudly marched down Main Street during the Christmas in Springboro parade, November 21, 2015

Springboro also has golf courses and private parks. Much of the green space belongs to Country Clubs and private neighborhoods, although the city operates a public country club, Heatherwoode CC.

All content from Kiddle encyclopedia articles (including the article images and facts) can be freely used under Attribution-ShareAlike license, unless stated otherwise. Cite this article:
Springboro, Ohio Facts for Kids. Kiddle Encyclopedia.