Kids Encyclopedia Facts
For other rivers of the same name, see Miami River.

The Miami River is a river in the United States state of Florida that drains out of the Everglades and runs through the city of Miami, including Downtown. The 5.5-mile (8.9 km) long river flows from the terminus of the Miami Canal at Miami International Airport to Biscayne Bay. It was originally a natural river inhabited at its mouth by the Tequesta Indians, but it was dredged and is now polluted throughout its route through Miami-Dade County. The mouth of the river is home to the Port of Miami and many other businesses whose pressure to maintain it has helped to improve the river's condition.

Although it is widely believed that the name is derived from a Native American word that means "sweet water", the earliest mention of the name comes from Hernando de Escalante Fontaneda, a captive of Indians in southern Florida for 17 years, when he referred to what is now Lake Okeechobee as the "Lake of Mayaimi, which is called Mayaimi because it is very large". The Mayaimi Indians were named after the lake, beside which they lived. Spanish records include the cacique of "Maimi" in a group of 280 Florida Indians that arrived in Cuba in 1710. Reports on a Spanish Mission to the Biscayne Bay area in 1743 mention "Maymies" or "Maimíes" living nearby. The river has also been known as the Garband River, Rio Ratones, Fresh Water River, Sweetwater River, and Lemon River. It has been known as the Miami River since the Second Seminole War of 1835–42. 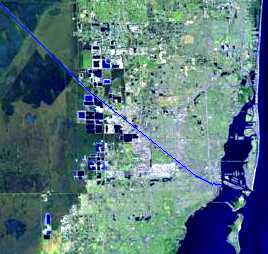 Map of Miami, Florida with the river in blue

In its original natural state, the river started at rapids formed by water from the Everglades flowing over a rocky ledge four miles (6.4 km) from its mouth. Frederick H. Gerdes of the U.S. Coast Survey reported in 1849 that "[f]rom the upper falls to near its entrance into Key Biscayne Bay… water in the Glades was 6 feet 2.5 inches (1.892 m) above low tide". The rapids were removed when the Miami Canal was dredged in an attempt to drain the wetland.

The river divided into a North Fork and a South Fork about three miles (4.8 km) above its mouth. Each fork extended only one mile (1.6 km) to rapids marking the edge of the Everglades. The North Fork had a greater flow and higher drop over its rapids. One-and-one-half miles (2.4 km) above the mouth of the river there was a tributary on the north side, called Wagner Creek, which was about two miles (3.2 km) long. The Miami River was also fed by several springs, including some in the bed of the river. Flow was variable, and in times of drought the river did not flow. 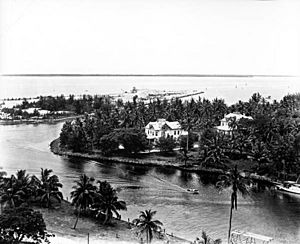 The mouth of the Miami River at Brickell Point
(August 1935).

The earliest known inhabitants of the area around the Miami River were the Tequestas. Their major town at the time of first European contact was on the north bank of the river near the mouth. Before the intensive development of Miami in the 20th century, mounds built by the Tequesta were located along the river. Spanish missions were briefly established beside the river in 1567–70 and in 1743, but the area was abandoned when Spain turned Florida over to Britain in 1765.

The area around the Miami River attracted settlers throughout the 19th century, with the major exception of the years of the Seminole Wars, but had little effect on the river. The United States Army tried to dig a channel through the sandbar at the mouth of the river in 1856 but stopped when it was decided that Fort Dallas would not be made permanent. 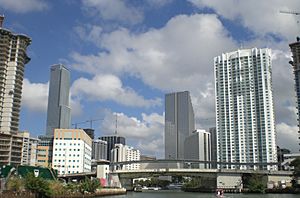 Modification of the river began in earnest with the arrival of the Florida East Coast Railway in Miami in 1896. There was much dredging and filling along the river. The rapids at the head of the South Fork were removed in 1908. From 1909 to 1912, the Miami Canal was dug, bypassing the rapids at the head of the North Fork. The canal was dammed off from the river for most of the construction period. When the canal was opened to the river in March 1912, large amounts of Everglades muck and finely ground stone from the dredging were washed down the river, silting it. As a result, the lower river had to be dredged three times in two years.

Dredging of the river and of canals connecting to the river continued into the 1930s. Deepening the Miami River (and other streams and canals draining into Biscayne Bay), as well as the drainage of the Everglades that was a major purpose of the dredging, led to saltwater intrusion in the area, forcing the abandonment of drinking water wells on several occasions. By the 1940s, dams were being installed on the canals leading into the Miami River to prevent salt water from traveling inland.

The Miami River also became polluted. In 1897, Miami's first sewer line started emptying directly into the river. By the 1950s, 29 sewers were dumping untreated sewage into the river. Dade County constructed a sewage treatment plant on Virginia Key in the 1950s and connected sewer lines to it, routing the raw sewage away from the river.

The Miami River is likely the shortest working river in the United States. The Center for Urban & Environmental Solutions reported in 2008: "Waterborne commerce through the Miami River port doubled between an annual level of about 250,000 short tons in the early 1970s to about 500,000 in the early years of the new century. Foreign trade accounts for most of the commerce through the Miami River Port. Exports dominate the Port's commerce, accounting for over 75 percent of the total. In the 1970s, exports had averaged 56 percent of the total. Most of the Miami River's foreign trade is with the nearby countries of the Caribbean, especially the Dominican Republic, Haiti and the Bahamas. This reflects the suitability of the Miami River for shallow draft vessels which serve the many shallow draft ports in the Caribbean."

The Miami River has long been home to many small cargo terminals at which smaller ships (up to about 230 feet (70 m) in length) call to load cargo, most of which is destined for ports in the Bahamas and various Caribbean nations.

Although the part of the river from Northwest 36th Street to its mouth is still polluted, this has been mitigated considerably by rigid enforcement of both international and U.S. laws regarding discharge of oil and sewage by ships, as well as of laws addressing industrial dumping. The muddy bottom, however, is still reported to contain undesirable substances in significant quantities.

In years past, many vessels docked in the river at the ends of their last voyages were abandoned and sank alongside the docks, creating eyesores and hazards to navigation. Those derelicts have been removed.

Invoking the authority of Port State Control, the U.S. Coast Guard vigorously enforces the many international and national regulations regarding safety equipment, construction, maintenance, and manning of ships entering all U.S. ports including the Miami River, virtually eliminating the many dangerously substandard vessels that had sailed from the U.S. in previous years.

In recent years, realizing they had common interests, various business entities along the river formed the Miami River Marine Group. The group works closely with local law enforcement agencies, the U.S. Coast Guard, ICE, and others to maintain clear channels of communication and cooperation. It now acts much as one port with numerous port facilities and support entities such as agents, surveyors, consultants, naval architects and engineers, and ship and machinery repair businesses.

Many of the ships sailing from the Miami River carry cargo to ports in Haiti including Port-au-Prince, Miragoâne, Cap-Haïtien, Port-de-Paix, Saint-Marc, Gonaïves, and Jacmel. Their cargo typically consist of dry foodstuffs such as beans and rice, canned goods, clothing, household goods and appliances, and used cars, trucks, and buses.

In times past, some of the cargo terminals on the river were areas of lawlessness. Law enforcement and regulatory agencies have eliminated most of that sort of activity. When the International Ship and Port Security Code and the U.S. Maritime Transportation Act of 2002 came into force (and in the prior runup) on July 1, 2004, most opportunities for crime were eliminated.

All content from Kiddle encyclopedia articles (including the article images and facts) can be freely used under Attribution-ShareAlike license, unless stated otherwise. Cite this article:
Miami River (Florida) Facts for Kids. Kiddle Encyclopedia.